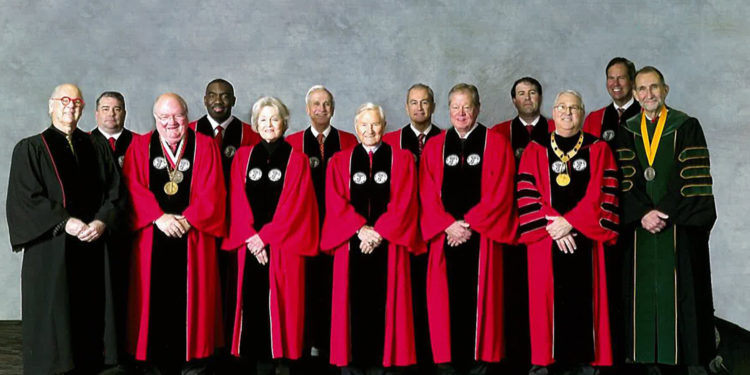 Curtis Fentress, founder and principal in Charge of Design for Fentress Architects, was conferred with an honorary Doctor of Fine Arts from North Carolina State University on December 18, 2019, at the fall commencement ceremony.

Honorary degrees represent NC State’s highest recognition of outstanding and distinguished contributions to scholarship, creativity, leadership, and humanitarian or public service, and recognize individuals whose achievements are extraordinary and have lasting distinction. The Board of Trustees makes the selection of honorary degree recipients from nominations submitted to and recommended by the Faculty Committee on Honorary Degrees. They are awarded to individuals who may or may not have an existing association with the university.

Fentress was born in North Carolina and raised on a tobacco farm in the small town of Summerfield. He graduated with honors from NC State’s College of Design in 1972 with a Bachelor of Architecture. During his time as a student at NCSU, Curt was awarded an AIA-AIAF Fellowship, a Graham Foundation Fellowship, and the Alpha Rho Chi Medal—the highest honor bestowed on a designer by an architectural school. Other awards and accolades followed: he was recognized with a Distinguished Alumni Award in 2010, became a Fellow in the American Institute of Architects (AIA) in 1996, and in 2010, he was honored with the AIA’s highest award for public architecture—the Thomas Jefferson Award for Public Architecture. This accolade recognizes architects who design distinguished public facilities and advocate for design excellence.

After graduation in 1972, Fentress joined the reputable firm of I.M. Pei and Partners in New York City; and in 1977 he joined the newly-formed firm of Kohn Pedersen Fox (KPF), also of New York. While at KPF, he was honored with Building Design and Construction magazine’s “Young Professional of the Year” award as project designer for the Amoco Building in Denver, Colorado. Intrigued by opportunities in the west, in 1981 Curt formed C.W. Fentress and Associates in Denver, where he infused modernist design with sensitivity to place.

Today, Curt has built an international, multicultural practice and directed the design of 93.6 million square feet of public space that welcomes, hosts and guides over 650 million people annually. Fentress has also won over 50 national and international design competitions. Over the past 40 years, Fentress has played pivotal roles in nearly all of the firm’s projects including Denver International Airport, Incheon International Airport in Seoul, National Museum of Wildlife Art, National Museum of the Marine Corps, Raleigh-Durham Terminal 2, the Tom Bradley International Terminal at LAX, and numerous others.

Throughout his career, Fentress has remained dedicated to the advancement of architecture at NC State by investing time, mentorship, and personal resources to support its mission and its many students. His affinity and passion for teaching students of architecture led to the North Carolina State University Airport Studio. This advanced graduate studio program gives students an opportunity to imagine new and innovative solutions for airports of today and the future by focusing on how design principles serve the public realm. The Airport Studio has drastically expanded the College’s studio offerings in terms of scale, monumentality, symbolism and technical challenge.

Fentress’s studio work was presented as part of the Symposium on Airport Design at the 2016 Venice Architectural Biennale, which led the European Cultural Center (ECC) to invite the College of Design to mount a major exhibit of Airport Studio work as part of the 2018 Venice Architecture Biennale. Its exhibit, “Future Airports: Global Design Thinking,” received the ECC’s Best Architecture University Award 2018 for contributing to the research and highlighting the significance of airport space and the value of the experiential journey.

On December 20, 2019, Fentress delivered the commencement address to the graduates of the College of Design. Not knowing exactly what the students would face in a few short months with the global COVID-19 pandemic, in his commencement address he urged students to, “. . . keep your youthful optimism for innovation and creativity as you begin your quest to make the world a better place. Unleash your collective and creative talents to find solutions to the world’s problems that are facing you.” This is a task he is convinced they are prepared for.