YOU ARE HERE:Home » Architecture » 18-Story Apartment Community Planned for the Golden Triangle
ArchitectureConstructionDesignDevelopmentMultifamilyRetail 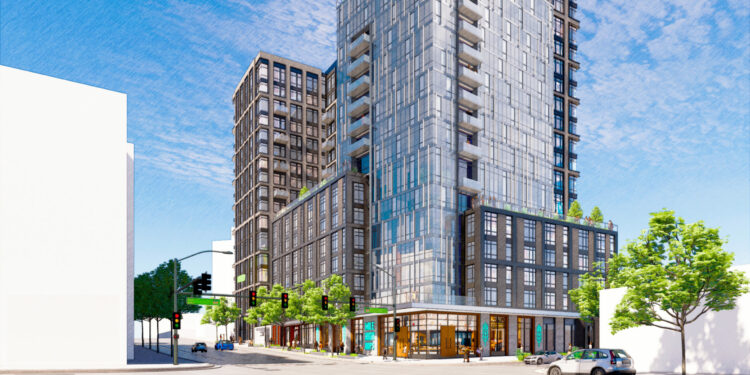 A new luxury high rise apartment community is planned for the Golden Triangle. Located at 808 N. Lincoln, the new 18-story community will offer 330 residences with luxury amenities as well as 5,000 square feet of ground floor commercial space. The developer, Trailbreak Partners, has engaged Hord Copland Macht (HCM) as the architect on the project concept, which has been submitted to the City of Denver and will go in front of the Design Advisory Board next month.

“8th & Lincoln offers an incredible location at the confluence of the Golden Triangle and Capitol Hill neighborhoods and will allow for spectacular views of the Front Range to the west,” said Doug Elenowitz, principal at Trailbreak Partners. “We’re designing a building that not only nods to the historic neighborhood around us but brings in the creative elements of the museum district to the north.”

The property will provide studio, 1-bedroom, and 2-bedroom apartments ranging in size from 500 square foot studio units to 1,200 square foot 2-bedroom/2-bath units. Pricing has not yet been established. Community amenities will include a rooftop terrace & lounge with mountain views; elevated pool deck and sun lounge; fitness center; meeting & workspaces; resident lounges; and a 324-stall parking garage. The ground floor will bring vibrant new retail to the area along both Lincoln and 8th Avenues.

In the current plans, the mass of the building is stepped to maintain a human scale along the primary streets while also growing in height to the north as you move towards downtown. The residential tower above is oriented and sculpted to maximize views of the Front Range to the west, culminating in a spectacular upper level indoor and outdoor amenity that capture the same panorama.  The architectural design pays homage to the historic neighborhood to the east and northeast by showcasing punched window openings, while the canted, glassy volume at the intersection pays homage to the creative heart of the museum district to the north.

“Golden Triangle is Denver’s hub for arts and culture with numerous galleries, museums, historic Victorian homes and some of the best restaurants in town and we are excited to bring more residential options to the area,” said Dave Bacon, director of development for Trailbreak Partners.

8th & Lincoln is anticipated to start construction in late 2023 with estimated completion in early 2026. ARCO/Murray Design Build has been engaged as the general contractor supporting pre-construction on the project.

Trailbreak Partners has completed or has in process a number of other apartment communities across the Denver metro area. The developer recently completed construction of Traverse Apartments, a 281-unit class “A” apartment transit-oriented development next to the Sheridan Station light rail station in Lakewood, Colorado. In fall of 2021, Trailbreak Partners completed West Line Village, a transit-oriented micro-neighborhood adjacent to the Sheridan Station consisting of 184-unit of attainably priced for-sale rowhomes in Lakewood. And the company will break-ground in October 2022 on the 32nd and Eliot Apartments located in the Highlands neighborhood which will redevelop the Habitat for Humanity of Metro Denver’s corporate headquarters into a 123-unit class “A” apartment community that provides for 10% of the units be restricted for lease to households making 80% or less of the area median income (“AMI”). Finally, Trailbreak Partners is in the design process on for the Ten Sheridan Apartments, a proposed 365-unit class “A” apartment transit-oriented development on approximately 2.5 acres of land to the south of Traverse Apartments that would replace a blighted shopping center with a signature gateway redevelopment at the edge of Lakewood City.