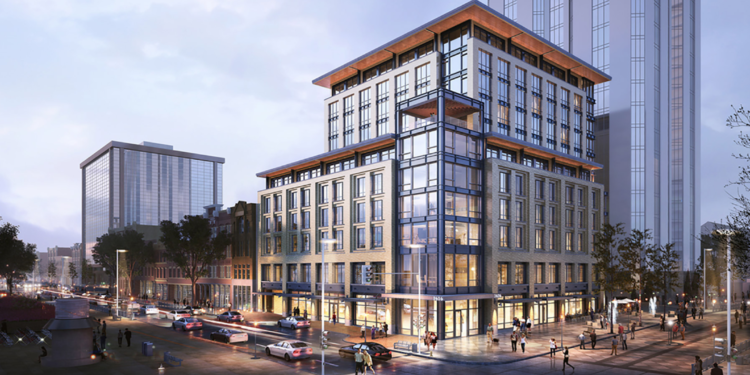 The Thompson Denver hotel at 1600 Market, courtesy of DLR Group.

DENVER — The Downtown Denver Partnership just released its 2019 State of Downtown Denver report. The report, funded in part by the Downtown Denver Business Improvement District, is the most comprehensive statistical looks at the stories and statistics behind a thriving Downtown Denver, detailing increasing investment, strong office market fundamentals, a growing and highly-educated workforce, and a vibrant residential population in our center city.

The report highlights the impact of place-based economic development efforts to meet the vision outlined in the 2007 Downtown Area Plan, the long-term strategy for downtown. Highlights from the 2019 State of Downtown Denver report include:

With a vision for the future, developers are responding to increased demand for residential, office, and hotel product propelled by strong population and job growth. Forty-eight new projects were recently completed, planned, or are underway representing $3 billion in investment. This investment will bring Downtown Denver to a total of 40 hotels, 10,700 hotel rooms, 13,285 residential units, and nearly 40 million square feet of office space.

Our downtown economy continues to diversify. Downtown is the center of the region’s tech workforce, with nearly 12,000 workers in tech downtown. That is up 14 percent year-over-year and has more than doubled since 2010.

An increasing number of companies are relocating or expanding to Downtown Denver, indicative of its reputation as one of the best places in the country to start and grow a business. Dozens of major companies opened a new office or moved their HQ to our downtown over the past year such as VF Corporation, Slack, and Quizlet.

Downtown Denver’s highly educated (72% of adults hold a bachelor’s degree or higher) and in-demand workforce is growing to support the center city as an epicenter of business and innovation. City building efforts continue to pay dividends with nearly 5,500 new jobs added downtown, representing over 4% annual growth which far outpaces that of the region, state and nation. Companies are choosing downtown because they see it as the center of an premier talent pool.

The downtown population continues to boom, growing another 13% last year. Downtown Denver has added almost 20,000 residents in less than 20 years, with today’s population at 25,727. Residential growth will continue, with forecasts indicating downtown will be home to nearly 33,000 people by 2023.

A robust mobility network enhances options for all downtown users, connecting to surrounding neighborhoods and strengthening economic development opportunities. In 2018, 35.4% of commuters drove alone, representing a 5% decrease from the year before. Therefore, an increasing number are walking, biking, or using a moped/scooter/motorcycle to get to work. Comprehensive details about commuting trends is available in the Downtown Denver Commuter Survey Report.

Downtown Denver is a world-class destination which welcomed 17.4 million overnight visitors last year who spent $5.6 billion. Downtown’s 40 hotels with 10,700 rooms and more than 568,000 square feet of meeting space have seen strong growth. Hotel room and meeting places represents $750 million in economic impact. Hotel occupancy rates were down slightly (2%) to 77.3% in 2018 as over 9,000 new hotel rooms came online or are planned metro-wide. Average Daily Rates held steady at $187.10, which represents a nominal (0.5%) increase over 2017.

Downtown Denver has over 150 acres of parks and open space, including Commons Park (20 acres) and Civic Center Park (12 acres). With Denver’s growing population, Denverites are getting more use out of park space. More public art (over 110 pieces concentrated downtown), cafés over (15,00 square feet of outdoor space in total), programming, and lighting are leading to additional opportunities to enjoy parks and open spaces in Downtown Denver.

The Downtown Denver Partnership is launching the Urban Forest Initiative, a $7.5 million effort to build the downtown tree canopy, with funding support from the City, the Downtown Denver Business Improvement District, property owners, and private philanthropy. In time, this initiative will more than double the downtown tree canopy bringing economic, health, and social benefits for decades to come.

For more information and to view the complete 2019 State of Downtown Denver report, visit downtowndenver.com.

HFF Arranges Financing for Six Apartment Communities Including One in Denver