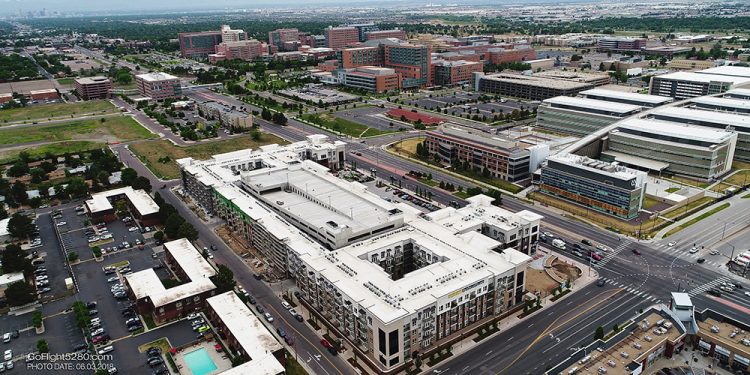 Forum Fitzsmons, a mixed-use residential and retail property in North Aurora is set be completed this month. (Catalina Development)

Multifamily demand remains strong despite tightened mortgage rates, according to Marcus & Millichap’s 3Q19 Multifamily Market Report. The Denver metro has one of the nation’s 10 largest affordability gaps between renting and owning, persuading many to choose apartment living rather than homeownership. There is an $880 difference between the average effective rental payment and the monthly mortgage payment on a median-priced home including insurance and taxes in the Denver metro. 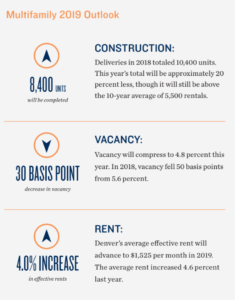 Employment growth has remained strong, though it has slowed in recent quarters, and it is still supporting strong in-migration to the metro. The tight unemployment rate has enabled the formation of new households as more people have jobs and are financially able to live independently. The increased demand has tightened apartment vacancy in nearly all of the metro’s submarkets

Deliveries will increase during second half of the year. Denver’s apartment pipeline has nearly 4,500 units scheduled to come online by the end of the year. Three projects with more than 350 units each will finalize later this year, with the largest project, the 397-unit Forum Fitzsimons in North Aurora, set to be completed in August. In downtown Denver, Luxe at Mile High will increase inventory with 382 new rental units once opened in October. This area has been a core focus for metro apartment developers, who have delivered more than 10,000 units since 2009. Littleton, while often overlooked by developers, will receive 352 apartments with the opening of AMLI Littleton Village, bolstering the submarket to its second largest annual deposit on record.