YOU ARE HERE:Home » Architecture » Apartment Project Proposed for 19th and Chestnut
ArchitectureDesignDevelopment 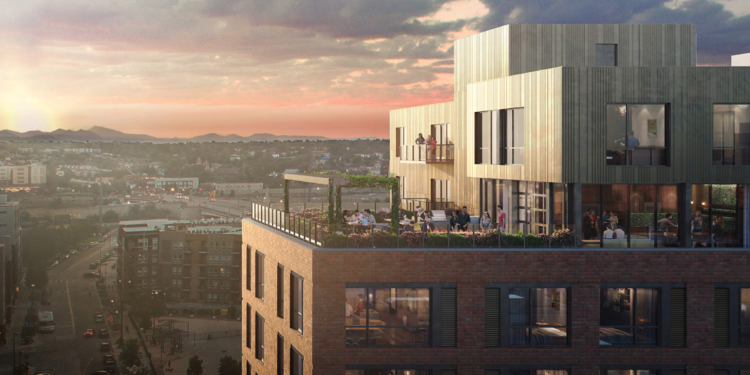 A multi-family project consisting of 198 apartment units is proposed for 2059 19th Street, at the intersection of 19th and Chestnut in Denver’s Union Station neighborhood.

The 13-story project includes studios and one to four bedroom units, which will feature prominently in the two slender, brick-clad vertical forms. According to submittal documents, the vibrant community will include numerous common gathering spaces, including street-facing exterior terraces at three different levels, and an active lobby featuring a fireplace hearth, social seating stair, fitness + yoga studio, co-working space, and a social laundry lounge.

The Denver Planning Board is currently reviewing the project. The developer for the project is Denver-based Pando Holdings and the architect on record is Shears Adkins Rockmore. Several new renderings were included with the submittal documents.

The project also takes advantage of its obligation to complete the existing partial hammerhead at the end of 19th St, providing a public plaza with built-in seating and shade trees which serves as an extension of the active lobby. As the project exists in the heavily pedestrian-and transit-oriented Commons neighborhood within easy walking distance of Union Station, only minimal surface level parking will be provided.

The project is currently making its way through the permitting process. Mile High CRE will keep you updated as to the progress of this project.

Renderings courtesy of City and County of Denver