YOU ARE HERE:Home » Brokerage » Aurora Apartments Sell for $143M
BrokerageMultifamily 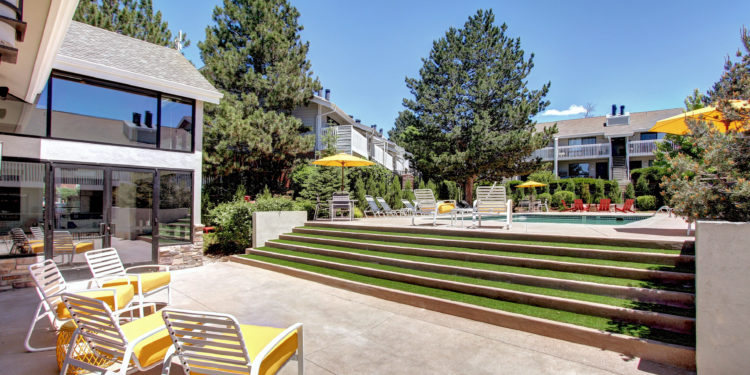 “Denver continues to outshine other markets with opportunities for investment in rental housing,” says Phillip Nahas, managing partner of Oak Coast Properties. “The city keeps expanding its solid base of reputable employers and attracting tenants with jobs, amenities, and an enviable lifestyle. There is significant demand from the region’s growing workforce for quality housing.”

The Courtyards at Buckley is comprised of 688 units and 563,932 square feet of rentable space situated across 34 buildings. The garden-style community sits on a 29.87-acre site in Arapahoe County and includes 308 one-bedroom, 368 two-bedroom and 12 three-bedroom units.

Built in 1984, all units within the community have been enhanced, to varying degrees, by previous owners. Based on the demand for, and performance of, fully upgraded units as well as continued demand for rentals in the area, The Courtyards at Buckley offers significant upside potential via additional upgrades to the community and its units. Return on investment will thus be driven through a planned improvement plan valued at approximately $2.5 million, which will include enhanced building aesthetics, new washer and dryer units, landscaping and amenity upgrades, establishment of a dog park, stair and roof repairs, maintenance repairs, etc.

The Courtyards at Buckley is optimally located near major employment hubs, retail centers and transportation connections. The Buckley Air Force Base is less than 10 minutes from the community and employs nearly 12,000 military and civilian workers. Major aerospace companies Raytheon, Northrup Gruman, Lockheed Martin and Boeing also collectively employ thousands nearby. The community is also less than 10 minutes to the Iliff Station, serviced by the R and H light rail lines, and is proximate to the Iliff Crossings Shopping Center, Town Center at Aurora and Aurora City Place retail centers.

With the purchase of The Courtyards at Buckley, Oak Coast Properties’ Denver asset acquisitions in the past 12 months total $320 million and the firm’s apartments portfolio now exceeds 4,529 units under management, with over $860 million in valuation. Echelon Property Group, one of Colorado’s leading apartment management companies, will manage the community.

The JLL team that arranged the Freddie Mac loan on behalf of Oak Coast Properties was led by Senior Managing Director Charles Halladay, Senior Director Brock Yaffe and Director Rick Salinas. The loan will be serviced by Holliday Fenoglio Fowler LP, a JLL company and a Freddie Mac Optigo℠ lender.