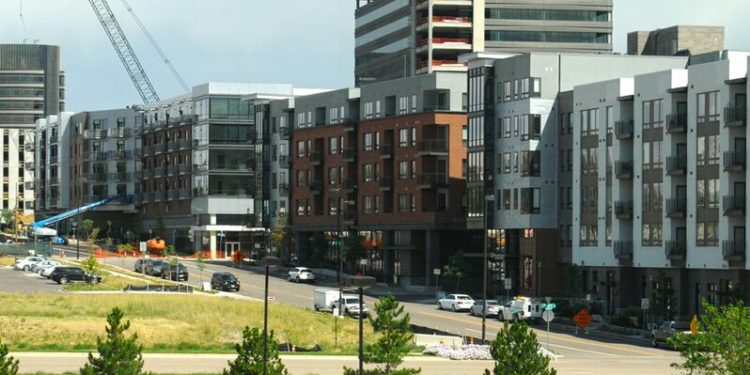 Piper Sandler secured financing for Belleview Station at I25 and Belleview in south Denver.

DENVER – Belleview Station, the mixed-use transit-oriented development at I-25 and Belleview in south Denver, has announced the completion of phase one. With more than 100,000-square-feet of retail space, 300,00-square-feet of office and 678 residences nearing full occupancy, developer Front Range Land and Development Company is eyeing future developments on adjacent blocks that fit with its master plan for a smart and sustainable urban village in southeast Denver.

“Belleview Station is rapidly becoming the downtown of the Tech Center, Colorado’s corporate capital, in southeast Denver. As more retailers, companies and their employees choose to relocate to this area, real urban synergies are starting to develop” said Trey Warren, vice president of Front Range Land and Development Co. “Belleview Station is a game-changing idea that merges density with transit access, upscale living, and access to open and urban spaces. The goal is to set in motion a walkable urban center where residents feel they are part of something and build community.”

According to Warren, the ultimate master plan for Belleview Station will include 1,800 residences with an equal distribution of for-rent and for-purchase options, 300,000-square-feet of walkable shopping and dining, more than 2.2 million-square-feet of intelligent office space, and a hotel. The plan leverages walkability and access to transit in order to reduce reliance on automobiles and the need for parking spaces. The plan offers unparalleled views and the proximity to outdoor living while delivering the benefits, conveniences and identity of an urban, downtown lifestyle. For residents, this translates to shorter commutes to work and a better work/life integration.

According to the Denver South Economic Development Partnership, the south metro Denver area around Belleview Station is home to seven of the nine Colorado-based Fortune-500 company headquarters. Nearly 30 percent of the state’s earnings originate here, with $32.78 billion (29.7%) of state earnings resulting from the Denver South economy. Also, Denver South’s job growth rate, at 6.3 percent annually, is almost twice the Denver 10-county average of 3.3 percent. This growth has led to impressive residential and daytime employee demographics in the area, with 293,000 residents and 134,000 households, and a daytime employee population of 227,000, within 5 miles of Belleview Station.

“Typically for development projects outside the downtown urban core, the emphasis is on quick absorption and quick sales. This often leads to development projects that are smaller, low-density, with decentralized buildings constructed and sold more frequently off ever-widening tangles of roads. This sprawl is the enemy of community and the density necessary to foster it,” said Warren. “By putting people before cars, Belleview Station is reinventing the urban village as the clean and green center of the south metro Denver office market. We want to achieve densities not yet seen in development outside the urban core,” he added.

Front Range Land and Development Co. is the master developer of the Belleview Station site, responsible for implementing the City of Denver’s General Development Plan for the area created in 2005 consistent with BluePrint Denver. Representing the Bansbach family, who has owned the land around Belleview Station since the late 1800s, Front Range Land and Development is helping to ensure that future developments on the site meet the long-range vision of both the City of Denver, and the family.

Ideally situated on the I-25 corridor, Belleview Station is a multi-modal mixed-use development and transportation gateway – with easy access to Light Rail, Bus, two major highways, local streets, bicycles and pedestrians. Built using a sustainable, smart and long-term master plan, Belleview Station will be a walkable district with generous open space, distinct urban residences, build-to-suit and speculative office, cutting edge shopping and dining, parking and a premium full service and boutique hotel. Residents, office workers and visitors to Belleview Station will have an authentic experience unlike anything on the Front Range.