YOU ARE HERE:Home » Construction » Carson Development to Add 1M SQFT of Retail to I-25 Corridor in Northern Colorado
ConstructionDevelopmentRetail 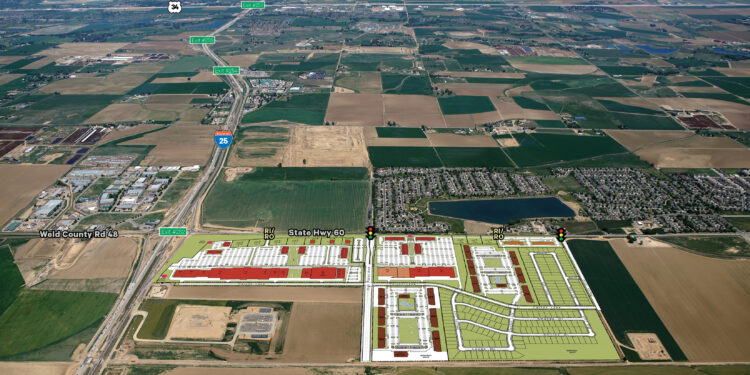 Carson Development Inc., a family-owned company that specializes in multifamily and retail construction, is currently developing Ledge Rock Center, a 200-acre, master-planned, mixed-use community, on the southeast corner of Interstate 25 and State Highway 60 in Johnstown. Carson Development has hired CBRE to market the more than 1 million square feet of retail space for lease.

“We chose this site based on the growth occurring in Johnstown and across Northern Colorado. The City of Johnstown’s staff and council have been among the best my company has ever worked with on a project. This is very important on such a large and complicated development. Our prior work on Johnstown Plaza was a tremendous success, and we believe Ledge Rock Center—at twice the size—will be just as successful,” said Mike Schlup, manager, Carson Development.

At full build-out, Ledge Rock Center will include over 1 million square feet of retail, 1,200 apartments, and 200 single-family residences. The town is also underway on a new high school near the site. Available retail options include anchor tenant opportunities, multi-tenant buildings with drive-thru endcaps, hotel parcels, and various pad sites. Murdoch’s Ranch and Home Supply has already committed to one anchor tenant space, pre-leasing 85,000 square feet. Phase one of the retail development is slated to complete at the end of 2022 or the first quarter of 2023.

“Our plan is to hold the retail space long term and potentially the multifamily buildings as well, which will help balance risks going forward,” added Mr. Schlup.

“Ledge Rock Center is open for business and well-positioned to centrally service the Northern Colorado communities. There simply aren’t many interchange opportunities like this left for a Class A retail development with a pro-business town like Johnstown behind it,” said Mr. Kendall, first vice president, CBRE.

Carson Development’s earlier Johnstown project, Johnstown Plaza, is located just north of Ledge Rock Center at the intersection of I-25 and U.S. 34 and is home to a 250,000-square-foot Scheels superstore. Another large national retailer, Buc-ee’s, recently announced plans for its first Colorado outpost just west of Ledge Rock Center, at the southwest corner of I-25 and SH 60.

“The I-25 corridor in Northern Colorado continues to be a strong retail destination as companies look at how best to service the robust housing market, strategic distribution hub, and continued employment growth. The commitment of national retailers like Scheels, Murdoch’s and Buc-ee’s is a testament to the continued strength of the corridor,” added Mr. Kendall.

Approximately 99,000 vehicles pass through the I-25/SH 60 intersection each day according to CDOT counts. The trade area has almost 350,000 residents within 20-minutes of the project and around 130,000 in daytime employment. That number is expected to grow to nearly 400,000 residents by 2026 according to Esri census data.