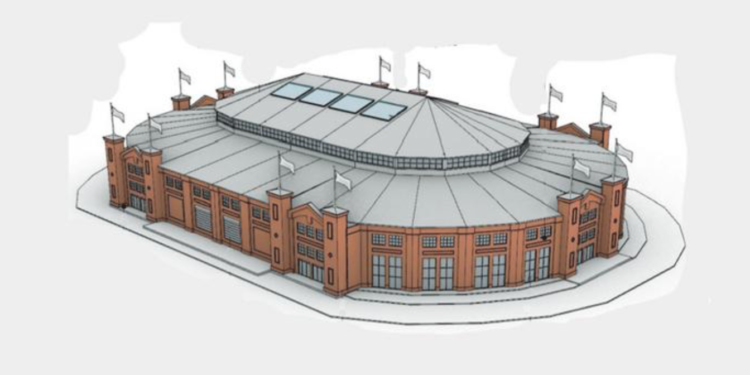 A conceptual rendering of the renovated historic 1909 Building at Denver's National Western Center. Credit: City and County of Denver.

The City and County of Denver and the nonprofit National Western Center Authority will provide $400,000 to Globeville and Elyria-Swansea neighborhoods to enlist their choice of professional advisors to secure community benefits at the National Western Center redevelopment. The funding, approved by Denver City Council on Monday, Oct. 4, will come from the city’s contingency funds and will help neighborhood residents advocate for what they want to be included in the redevelopment, will help them negotiate a formal community benefits agreement, and will support them in identifying future sources of revenue for a community fund.

Construction is well underway on the first phases of the National Western Center. Future phases of the project will include a 10,000-seat arena, the rehabilitation of the 1909 Stadium Building to house Denver’s first public market, and other public assets, as envisioned in the 2015 master plan. They could also include a mix of uses such as office, retail, housing, open space and more. City and National Western Center officials want the community’s input on those choices.

On Monday, Oct. 4, Denver City Council approved a request from the National Western Center Authority for a $400,000 grant from the City and County of Denver. The funding is earmarked to allow GES to enlist professional support for legal, financial and land-use matters, and to build capacity for:

Community benefits agreements often include anti-displacement measures, affordable housing requirements, and land-use and design choices. The agreements can allow for a more constructive and collaborative conversation about meeting a community’s needs, especially as it relates to considerations around equity. This grant is the first of its kind in Denver to help empower a community with the capacity and expertise needed to have the biggest impact.

“My priority is delivering equitable outcomes for the residents in these neighborhoods. We want to ensure residents have a meaningful seat at the table and the tools they need to realize the benefits most important to them and their communities,” Mayor Michael B. Hancock said.

“The GES communities in Denver have advocated for this kind of support for years,” said City Councilwoman Debbie Ortega. “Any major redevelopment project needs community input, but many residents wish they could come to the table with more capacity and expertise, to have a bigger impact by securing greater community benefits. I’m pleased to have worked with the community and the city to deliver this important resource.”

For more about the National Western Center, visit nationalwesterncenter.com.