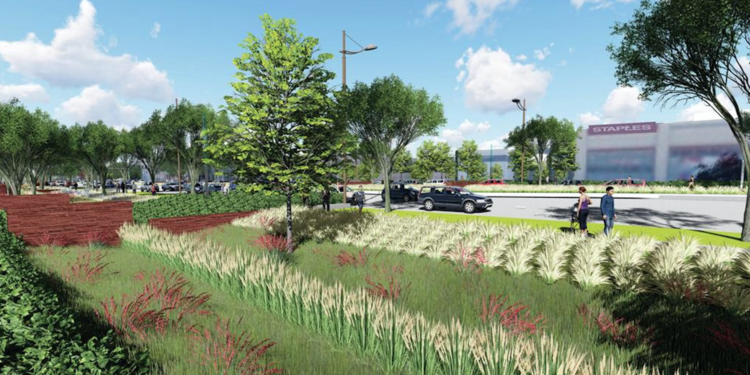 DENVER – Known for creating engaging public spaces across the country and around the globe, Denver urban design and landscape architecture firm Civitas has recently turned its award-winning design skills toward taming two big streets close to home. The firm’s design is under construction transforming the four-lane arterial Alameda Parkway in the Belmar area of Lakewood, where Civitas was asked to revisit the original 1930s vision of the roadway as a grand tree-lined boulevard connecting Denver to the Rocky Mountains. At the same time, in Denver’s Mayfair neighborhood, Civitas is at work on a concept design that reimagines the mile-long, four-lane Hale Parkway as a linear park that favors community while solving stormwater issues.

Calming traffic and promoting walkable, bikeable neighborhoods has always been imbedded in Civitas’ mission of creating healthier cities through design. Now, a new report from an American Association of Landscape Architects (ASLA) affiliated coalition finds that American streets – with their overriding focus on the movement of vehicles – have gotten more dangerous in the past decade, with the two most recent years as the deadliest on record for pedestrians. “It’s the equivalent of a jumbo jet full of people crashing – with no survivors – every single month,” the report states.

But cities often focus on specific issues when they look at redesigning roadways that don’t necessarily consider the pedestrian question. “We’re typically approached for a project from the perspective of looking to solve a specific problem,” says Civitas Principal Craig Vickers. “For instance, with Alameda, it was to rethink the four-lane suburban arterial as something closer to the grand tree-lined route first envisioned. With Hale Parkway it was to solve stormwater run-off issues. In both cases, we reframed the conversation,” he explains, “looking at it as an opportunity to simultaneously solve other issues and bring amenities to the communities.”

The plan serves to unify the Belmar Town Center – also designed by Civitas and winner of an International Making Cities Livable (IMCL) award as a “Healthy 10-minute Community” – with adjacent neighborhoods. “Alameda is no longer a divisive void in the fabric of Lakewood’s downtown,” says Vickers. “Rather it becomes a new and interesting seam that rejoins community.” 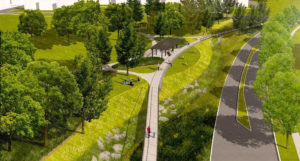 A concurrent Civitas project, the Hale Parkway “greenway” is under consideration as part of a larger stormwater strategy to alleviate flooding in Denver’s South Park Hill, Hall and Montclair neighborhoods. As part of a multidisciplinary team tasked with increasing water quality and flood mitigation strategies for the Upper Montclair Basin, Civitas again reframed the discussion.

“Studying historical photos of the area revealed that Hale Parkway follows the path of a former creek that once drained the basin,” says Civitas Principal Chris Parezo. “In the 1930s the creek was piped and by the 1940s the entire area was developed, resulting in 50 percent impervious surface. We saw the flood mitigation goal as an opportunity to create a neighborhood amenity that inserts nature and park space into the urban fabric.”

The Civitas plan, currently in the concept design phase for a potential spot on the City and County of Denver’s 10-year Capital Improvement Plan, reimagines the busy parkway as a linear stormwater park bordered by a local street. The design maximizes the space dedicated to water quality and stormwater conveyance, increasing park space by eliminating non-essential cross streets and floating a main circulation route over the naturalized drainage system.

“The linear park would incorporate plazas, decks, nature play areas and education elements at key moments,” says Parezo. “The floating boardwalk provides a mile-long ribbon that allows users to interact with and experience the natural environments and connect to existing neighborhoods.”

Historic Denver to Honor Buildings that Preserve Culture, Affordability and Sustainability in Denver