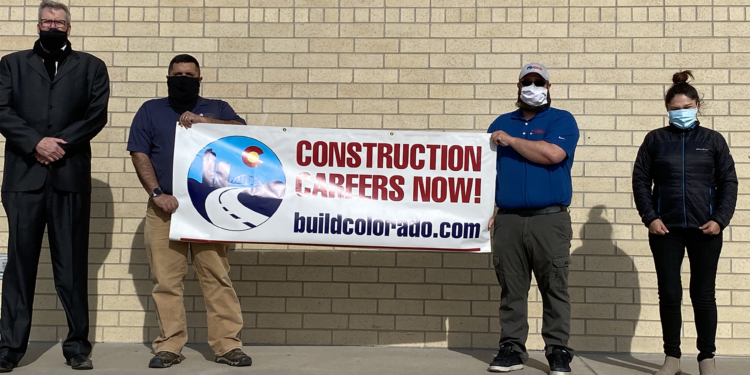 “Our goal for Adams 14 is to be a learning center for the entire community, where learning is not just from 8 a.m. to 3 p.m.,” commented Porter Cutrell, Ed.D., Adams 14’s director of Career Technical Education. “By partnering with programs like Construction Careers Now, we have more resources to personalize our educational offerings, and assist not only the students attending our schools, but also their parents and other family members, as well.”

The partnership between CCN and Adams 14 also stands to benefit the construction industry as a whole in Colorado. “CCN is truly a win-win for local communities and construction firms, because it brings together the workforce that construction companies need to keep building the infrastructure communities need to grow and thrive. How rewarding is it to drive by local schools and community centers that its own citizens have actually built,” commented Bryan Cook, executive director of the Construction Education Foundation of Colorado (CEF Colorado) – one of the supporting partners for CCN.

Cook has led the CCN program since its inception in July 2016, securing grant funding, recruiters, instructors, marketing and industry support for the program. “By offering this construction workforce training at no-cost to participants, we rely heavily on industry and community support to provide this much-needed career foundation in construction for those who need it most,” said Cook.

The partnership for CCN and Adams 14 stemmed from the award of a RISE Grant, where CEF Colorado, Front Range Community College, and Adams 14 collaborated to offer a P-TECH program – Pathways in Technology Early College High Schools – in Colorado for grades 9 – 14. CCN is a supplemental program to this P-TECH where high school graduates and adults can learn more about the career opportunities available in construction and make connections with local construction firms for employment.

Pre-pandemic, CCN offered its construction basics training program in-person, located at various locations throughout the metro-Denver area since its inaugural class in September 2016. Since then, CCN has graduated 1,604 participants and added over 730 hired construction craft professionals to the construction workforce in Colorado. In addition, CCN has graduated a diverse population of new construction professionals, representing 29% Hispanic, 22% African American, and 3% Asian American respectively. Since going virtual, CCN has increased its female population to 25% of its graduates, well above the 10.9% of female construction workers nationwide, as reported by the U.S. Bureau of Labor Statistics as of January 2021.

Since March 26, 2020, when Governor Polis declared the construction industry essential, CCN responded to the needs of Coloradoans still looking for work by offering its first fully virtual program in April 2020. With safety ever paramount in the construction industry, CCN also continued to offer safety training via Occupational Safety and Health Administration (OSHA) trained instructors, so that CCN graduates can obtain their OSHA-10 cards. Each four-week cohort also includes a virtual Hiring Fair where construction firms provide a meet-and-greet overview of their companies and the opportunity to speak directly with interested CCN candidates. CCN has offered seven virtual training sessions in total since April 2020 with steady classes of 40 to 50 graduates.

Although the program is currently offered virtually, CCN instructors still broadcast from ACHS nightly with live construction demonstrations to augment the construction educational training. CCN is preparing to teach in-person as soon as the District allows.