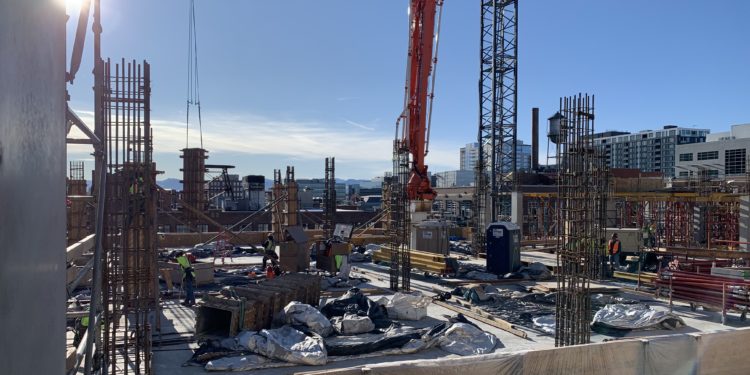 Construction underway on the 21,100-square-foot office building at McGregor Square. 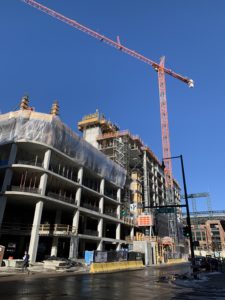 Exterior view from the corner of 19th and Wazee.

Last week, the Urban Land Institute (ULI) Colorado provided a first-hand look of one of Denver’s most eagerly awaited projects: McGregor Square. Named in honor of the Rockies’ late president, Keli S. McGregor, the project is expected to reenergize LoDo upon its completion in January 2021.

Project partners were on hand to describe the details of the project, including Daniel Aizenman, senior principal at Stantec. The Colorado Rockies is the project developer, Stantec is providing architecture, interior design, lighting design, land planning, landscape architecture, and visioning for the project, and Hensel Phelps is the general contractor.

McGregor Square will encompass 655,000 square feet of residential and commercial space, creating a vibrant, year-round complement to Coors Field. Three separate buildings will surround a 29,000-square-foot open content plaza, with the buildings housing 112 private residences, a 176-room hotel, restaurants, retail stores, 21,100 square feet of Class A office space, and multiple entertainment spaces. The plaza, which is the focal point of the development, is designed to be a community gathering place before and after games, activating the area around the ballpark. 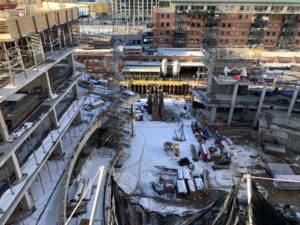 Interior perspective of the Plaza.

“McGregor Square is a once in a generation project. It aims at the heart of people and celebrates everything that is unique about Denver and Colorado. The project was designed to encourage people to experience, linger, talk, stroll and appreciate everything that is exceptional about our community. With a thoughtfully crafted public realm, combined with a great mix of uses including office, residential, hotel, retail, food and beverage, the Rockies Hall of Fame, and close to 50,000 square feet of open space and content plaza, McGregor Square completes more than 25 years of the LoDo evolution,” says Aizenman.

Originally the site of the Coors Field West Parking Lot, the development is being built on top of a subterranean parking structure that will provide 400 parking spaces to tenants and guests. While that may not sound like many given the grandeur of this project, it is the opinion of the project team that ride-sharing services and mass transit should offset the loss of the West Lot. 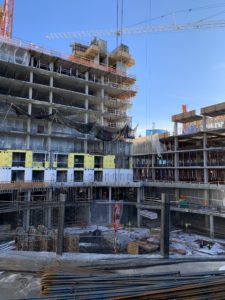 Ground floor perspective of the Plaza, where the curved big screen will be displayed.

The project is in the process of entitling a large, curved big screen for the plaza that will show a range of events — everything from yoga in the mornings to a Rockies game. Tenants renting the available event space and terraces of the development will also be able to rent the use of the big screen.

Though a name or brand is yet to be announced, the hotel will be managed by Sage Hospitality. Sage also manages the Maven Hotel at Dairy Block and the Crawford Hotel in Union Station. The hotel will also include 12,000 square feet of conference and banquet facilities. “People will be able to break out of the conference center to take advantage of the terrace overlooking the plaza,” explained Aizenman.

Uniquely, a connecting bridge will be constructed to join the hotel to the residential building — a practical design addition considering that the condo residents will share some of their amenities with the hotel.

From its inception, the project was master planned and designed for people. “Special attention was paid on how pedestrians engage with the project. Stantec’s design team elected to cut the site diagonally to make space for an iconic, circular content plaza, that connects to Wynkoop Promenade, while also giving presence to Coors Field both on third and home plate entrances.

Feeding off the success of the near-by Dairy Block and its Milk Market food hall, McGregor Square will also feature a 16,000-square-foot food hall curated internally by Monfort’s team that will house a mix of food and beverage options and retailers. “People can permeate diagonally to the heart of the project via the food hall entrance along 19th and Wazee. Most retail and food and beverage tenants on the ground and second floor will have access and visibility from both the perimeter of the project and the content plaza life and activity,” added Aizenman.

On the second floor, under the hotel, Stantec is in the process of designing the Rockies Hall of Fame Museum that will add another dimension of sports memorabilia to a game at Coors Field.

The condo portion of the project is pursuing WELL building certification. Listing brokers for the condos are Dee Chirafisi, Kevin Garrett and Matt McNeil with Kentwood City Properties. Official marketing will begin in January but according to Chirafisi, presales are going extremely well. Condos at the project are averaging $1100 per square foot and close to 40 percent of the units are currently under contract. Unique features of the condos include valet parking for guests, an indoor dog park, as well as a members-only bar to be located on the second floor.

Dick Monfort, owner/chairman and chief executive officer of the Colorado Rockies, will be moving into McGregor Square and will serve as the HOA’s lifetime president. The Rockies owner is under contract for one of the two penthouse units on the top floor of the development. “McGregor Square will be an urban jewel sitting right across from Coors Field, in the heart of LoDo, and will be more than just a residential condo development. it will be a community that is all-encompassing, friendly, fun, lively, safe and clean. And for Karen and I, it will be our home,” says Monfort.