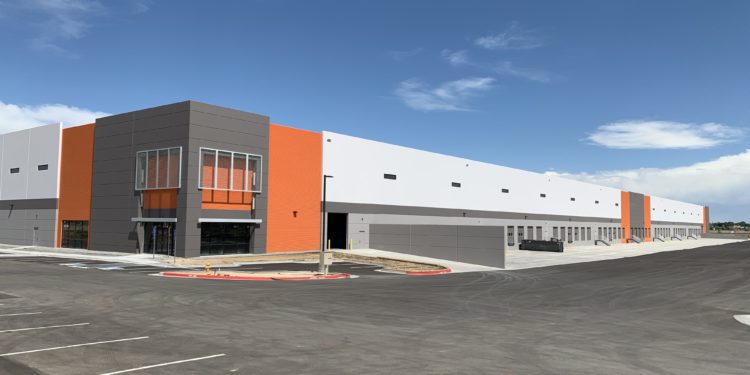 Strong leasing and construction activity continues at 76 Commerce Center, a 1.7-million-square-foot, Class A industrial park in Brighton. Joint venture partners Hyde Development and Mortenson have announced a 152,682-square-foot lease signed to an undisclosed tenant in Building 4 and began construction of the 526,400-square-foot Building 3.

Building 4, which totals 352,240 square feet, was completed in August. There are nearly 200,000 square feet remaining for lease, divisible to 50,000 square feet. According to Newmark Knight Frank (NKF). the 152,682-square-foot lease is one of the largest industrial leases this quarter in metro Denver.

“We have experienced incredible tenant interest in 76 Commerce Center,” said Wafer. “Users are attracted to the development’s location on, visibility from and superior access to the front range via I-76; outstanding design with large truck courts and trailer parking and proximity to a vast labor pool.”

Building 3, which broke ground in September, will measure 526,400 square feet and is a cross dock design with significant trailer parking and will be divisible for between one and four tenants. One 546,000-square-foot building–Building 1–remains to be developed in the industrial park and is planned to break ground next year.

“As construction begins on 76 Commerce Center’s second to last building, we continue to welcome high-quality tenants as the value of the e-commerce, warehousing and industrial sector is reaffirmed by consumer behavior throughout the last few unprecedented months,” said Paul Hyde, president of Hyde Development.