YOU ARE HERE:Home » Architecture » Convex Nature of Design
ArchitectureConstructionDesignEngineeringHealthcare 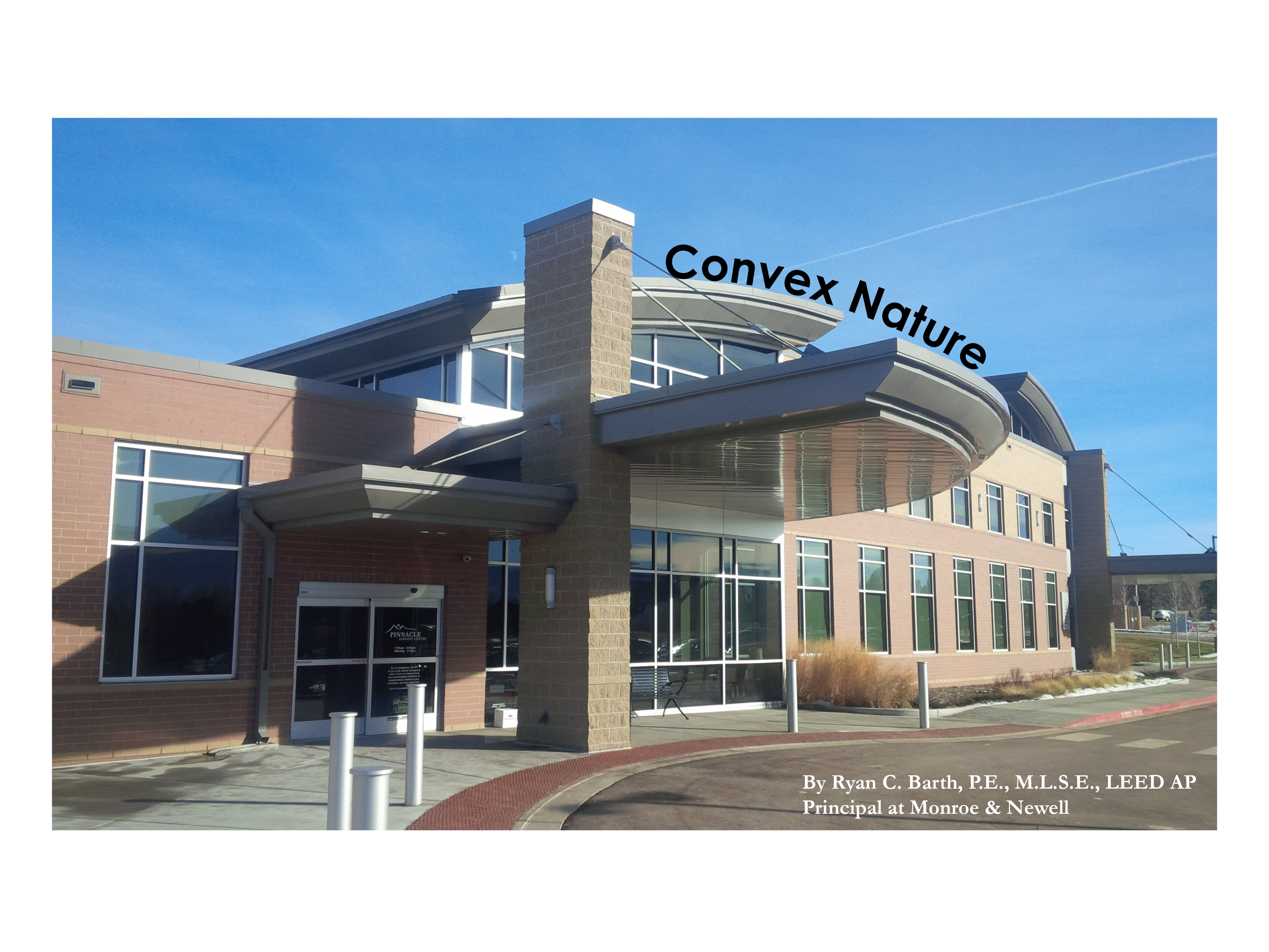 In the pursuit of design excellence and creating a unique user-experience, fabricating the client’s vision into structural form can often times seem untenable… Much like expeditioner Zebulon Pike, who upon gazing at Pike’s Peak apex for the first time in 1806, purportedly claimed it to be unreachable, the design and construction team faced an uphill battle

In the pursuit of design excellence and creating a unique user-experience, fabricating the client’s vision into structural form can often times seem untenable. From the emerging urban setting of Colorado Springs, a design team charretted with a group of practicing ophthalmologists to envision a building not only with clear, majestic views of Pikes Peak, but also one that came to resemble the anatomy of the human eye itself. Much like expeditioner Zebulon Pike, who upon gazing at the mountain’s apex for the first time in 1806, purportedly claimed it to be unreachable, the design and construction team for Pinnacle Eye Center faced an uphill battle to erect an arc-shaped building containing a series of concentric curvilinear and radial forms.

Early design discussions held with a group of practicing Ophthalmologists presented the team with a challenge – how to mold and shape a new facility to fit within constraints imposed by the suburban setting.  The answer lay in the shape of a bold arc, sweeping across the site and concurrently creating a series of concentric curvilinear and radial forms.  As a result, the conceived form of the building resembles the anatomy of the human eye itself, a fact that was hailed by the doctors as a stroke of genius.

Located off North Union Street, the natural topography of the project site is sunken below street level, creating a sound barrier from traffic. Seemingly simple in plan, a central axis divides the functionality of space into two distinct volumes – an ambulatory surgical center on the north side and a professional practice on the south side. Radial grid lines converge on a vertex, akin to rays of light passing through a series of convex lenses.  Meanwhile, circumferential grid lines define the spatial mass, establish column locations, and carve out bays of programming space.  The largest radius defines the western exterior wall, where light glazing panels offer a nice contrast to heavy stone veneer.  In addition to insulating against Colorado Spring’s famous winters, the translucent panels admit soft daylight from the northwestern sky. The greatest challenge to the design team included the sleek canopy framing the main entrance.  Resembling a pie-shaped wedge, the canopy itself is nearly 1,100 square feet but appears deceptively thin when viewed from the exterior. In order to preserve the owner’s vision, there are no columns in the entry canopy. The design and construction team overcame this feat by supporting the convex shape with fins that had to be aligned on radial grid lines then built at an angle. Aluminum fascia subtends the 39-foot arc and wraps the perimeter to blend seamlessly with the horizontal expression of adjacent curtain wall mullions.  Metal paneling comprising the soffit conceals structural tubes and I-beams which were detailed and fabricated to strict tolerances. The sheer mass of the overhang, while seemingly defying gravity, creates a natural transition for visitors entering.

Upon entering the vestibule, visitors experience a dramatic change in scale as they pass into the grand atrium.  An airy volume, the atrium extends up to a clerestory roof where perforated metal attenuates noise.  Radial lines seemingly welcome patients and draw them toward the reception desk.  Muted in color but exuberant in pattern, a mosaic of tile decorates the atrium’s polished concrete floor.  Continuing up the curved staircase, visitors arrive on the second level where patient exam rooms take on sector shapes rather than common rectilinear forms.  Adjacent corridors are framed by diverging walls which reach out to pull in light.  Indeed, no two lines are parallel, ensuring that rooms are devoid of acute angles and tight spaces.  As a result, conference rooms and waiting areas feel quite generous and comfortable. To ensure occupant comfort, the structural design also addressed mitigation of elevated floor vibration.  Often overlooked in design, the perception of motion can sometimes be problematic during the life of a building if tenants become annoyed by ‘bouncy’ floors.   In this facility, however, the acceleration limits were established not by human perception, but by strict tolerances of medical equipment.  Retinal scanning machines and other optical devices function best when the floors to which they are mounted are rigid enough to dampen out any vibrations induced by rhythmic excitations.  Careful selection of steel beam and girder framing confirmed that the natural frequency of the floor was sufficiently higher than the forcing frequency of people walking down an adjacent corridor.  Principals of structural dynamics were then applied to predict the favorable response of the floor.  During a nascent stage of construction, long before office furnishings were installed, an excellent performance of the floor was observed.  Tenant interiors such as partitions, fixtures, and furniture increase the critical damping of the assembly, thereby reducing accelerations and enhancing the overall solid ‘feel’ of the floor.

Two fins serve as vertical counterpoints to the building’s strong horizontality.  The fins’ primary purpose is to mitigate glare within the offices, but they also provide texture and scale.  Each fin serves as an anchor for the ambulatory surgical center and the professional practice.  To stabilize the building against wind forces, structural design takes advantage of the fins’ locations to provide ductile steel plate shear walls, each only 3/16” thick, which anchor each floor and roof diaphragm.  Thin steel plates obviate the need for diagonal X-braces which would otherwise encroach on the tenant space.  Even though Colorado Springs is not located in a region of high seismic and geological risk, thin steel plates are surprisingly robust and are gaining popularity in use for projects up and down the Front Range.  At Pinnacle Eye Center, steel plates proved to be a viable solution to fit within narrow aspect ratios between fenestration.  Where steel plates were incorporated into exterior walls, the plates were positioned on the inside face to minimize the conductive thermal gradient through the wall.

The curvilinear motif of the plan is echoed in the clerestory roofs, where each steel truss panel aligned with the curtain wall mullions to minimize shadows cast inside. For duality of scale, the radii of clerestory roofs and entry canopies are proportioned at the same fraction.  As a result, the ambulatory surgical center features curved elements that are slightly downsized from the office.  The design objective there was to accentuate the private practice side of the facility.

Spandrel beam framing around the perimeter of the floor also demanded close attention to detail.  On the convex side, the larger radius meant that the slab edge closure angle could easily be curved to support the stone veneer cladding.  On the concave side, the tighter radius sometimes meant that longer steel spandrel I-beams had to be could remain straight if offset inward slightly to maintain constructability.  Shorter spandrel beams on the concave side were made from curved hollow tubes, whose superior properties allow them to resolve applied torsion from the weight of the curtain wall glazing.

A degree of perceptual unity is achieved where the optical sense of sight is augmented by the haptic sense of touch and further enriched by the kinesthetic sense of movement.  Smooth glass surfaces juxtaposed with rough stone veneer offer a tactile sense of contrasting materials.  Moving through space defined by concentric circles, visitors to Pinnacle Eye Center can experience a sort of convivial architecture, while those fortunate enough to work there can draw inspiration from the pristine view of Pikes Peak. Through tireless collaboration and assiduous attention to detail, ostensibly unattainable goals were in fact reached, in the spirit of Mr. Pike’s tireless ascent.

Development Along the A Line: "Corridor of Opportunity" 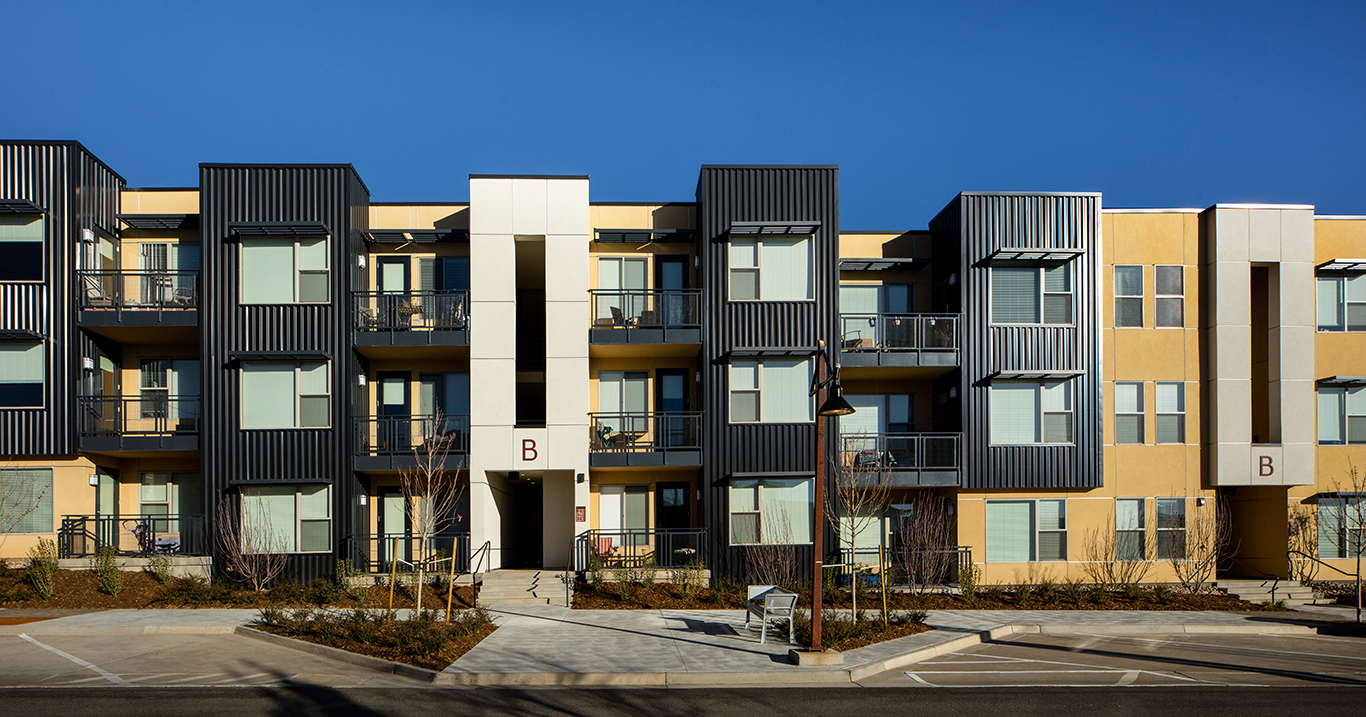 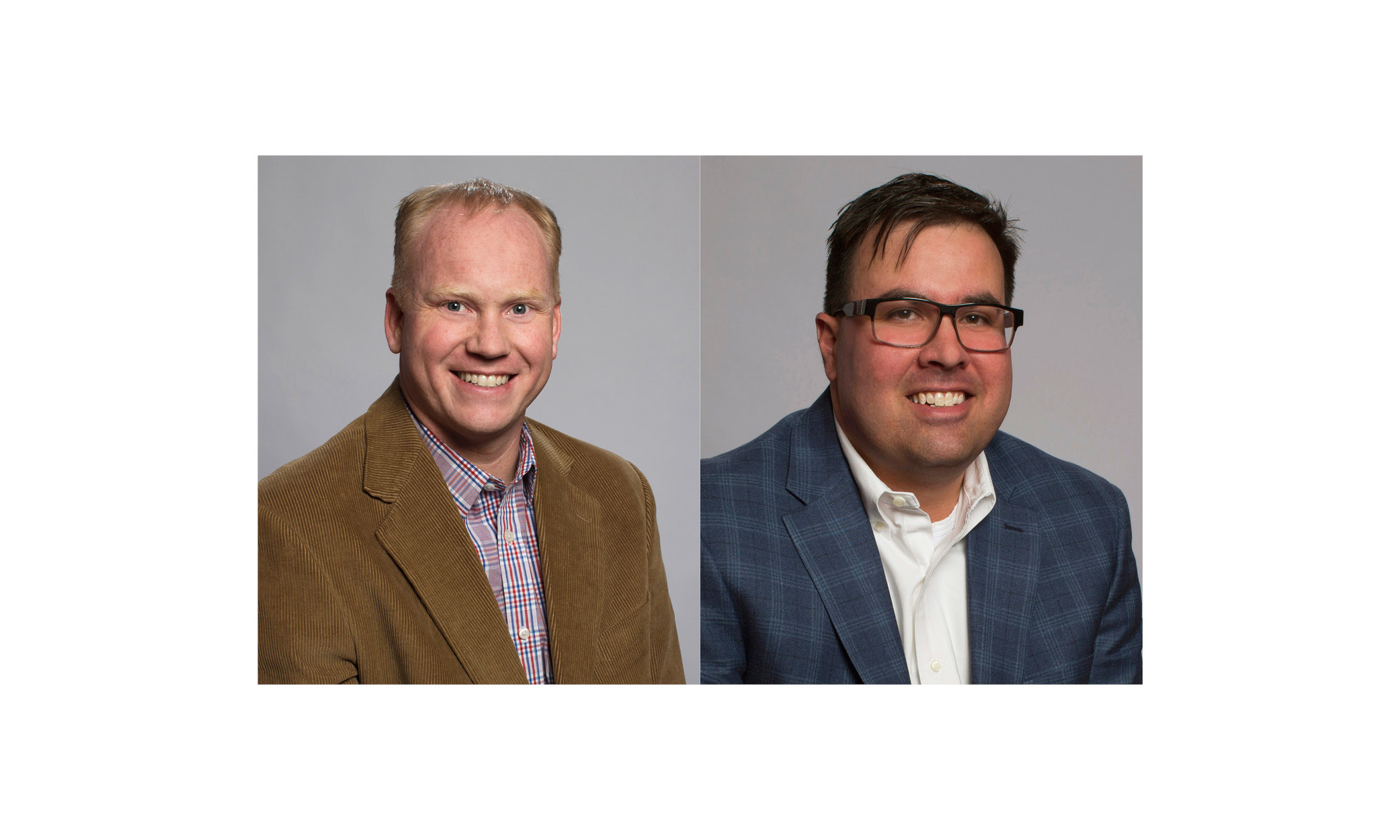 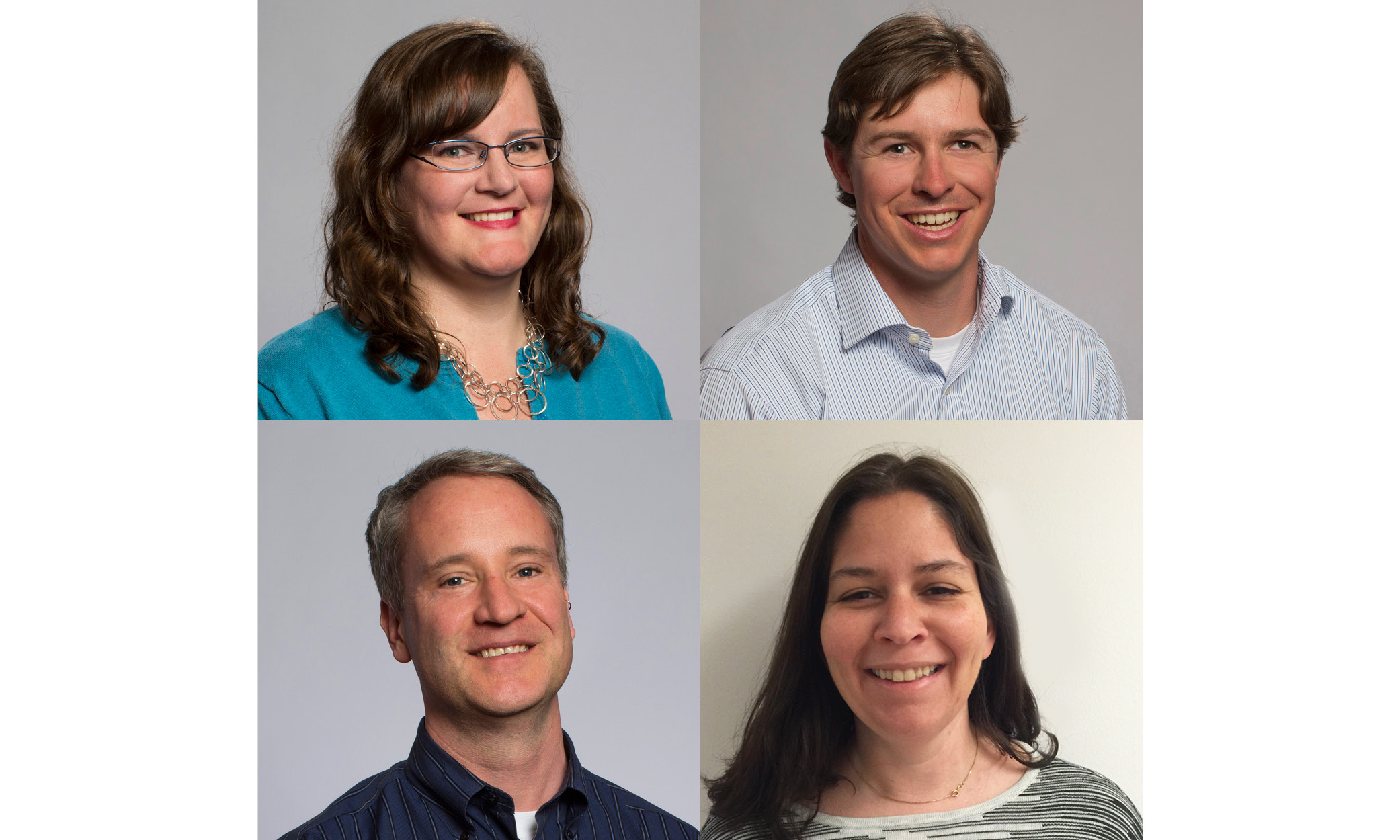