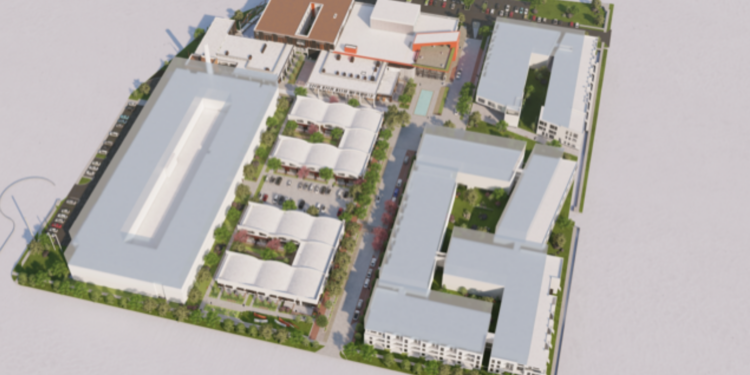 Iselo 40th Avenue LLC (Iselo), the owner and developer of the High-Iron 40 project in Elyria-Swansea, has entered into a partnership agreement with LDG Development — the nation’s 12th largest developer — for the development of High-Iron 40 that will provide a total of 900 units of high-quality multifamily housing, of which 10% will serve residents earning 60% of the area median income (AMI). Denver-based Sprocket Design & Planning is the master planner and architect for the project.

Purchased in 2018, the 14-acre site located at 2535 E.40th Avenue, just minutes from downtown Denver, once served as an industrial property. At the time of purchase, Iselo worked with Denver Community Planning and Development (CPD) on the Site Development Concept Plan (SDP) to rezone the property from industrial to mixed-use, which includes residential. With the city’s support, rezoning to MX-3 was approved by the city council in May 2019. As was the case with many development projects, the onset of the COVID-19 pandemic delayed plans to move forward. Once activity resumed, Iselo moved forward to obtain final approval of the SDP, complete construction drawings for the first and second phases of the development, and submit the construction drawing for the first phase to the building department.

In preparation for repurposing the existing building and construction of the first phase, Iselo proceeded in 2021 with interior demolition and asbestos remediation. As construction was ready to begin, the dramatic increase in construction costs and a rapidly changing financing environment caused Iselo to rethink its strategy, seeking a partner for the overall development. This ultimately led to the partnership with LDG, which not only has extensive experience in developing multifamily communities but is also one of the country’s largest developers o affordable housing.

The two companies share a common commitment to providing high-quality developments that create a community for their residents and neighbors. This commitment is reflected in the decision to include a public park and playground as part of the 2 acres of public open space, an agreement in the SDP, as well as a 2,000-square-foot community center. The SDP also includes a plaza that will be designed for the public to enjoy music and other arts-related events and festivities.

The Expanding Housing Affordability (EHA) policy passed by Denver City Council in June 2022 contains a provision allowing for an increase in height by 1 story if the developer commits 10% of the units to families earning 60% AMI. Iselo and LDG have asked the city for this increased height on two of the four projects to be developed on the site. These two include any development on the eastern portion of the site along Clayton Street and the southwest corner along 40th Avenue and Columbine Street. Other than the additional units that result from the height increase on the two projects, there is no change in the overall site plan. These changes were presented at a neighborhood meeting earlier this month.

Under the current affordable housing agreement with the city, Iselo is required to provide 70 affordable units at 60% AMI in order to begin the fourth phase of the High-Iron 40 development. That phase is currently projected to start in 2024 at the earliest, with completion 24 months after construction begins. By incorporating the incentive changes in the EHA however, Iselo/LDG will not only increase the number of affordable housing units they are providing by over 20% but incorporate many of those units in the first two phases of High-Iron 40.