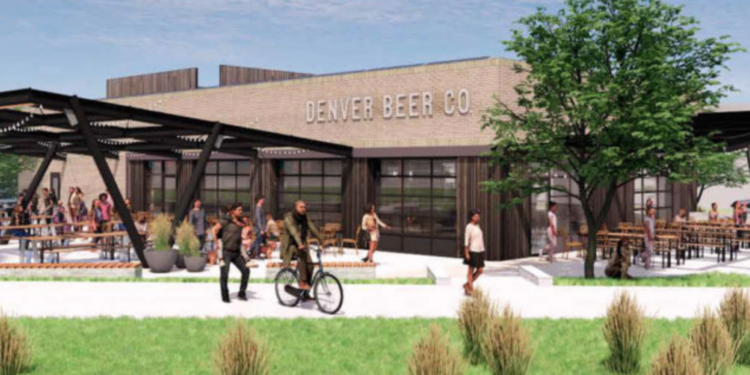 On Thursday, May 12, Denver Beer Co. broke ground on its fourth taproom on a .473-acre land parcel located at 7070 E Lowry Blvd within the Exchange at Boulevard One development in Denver’s Lowry neighborhood. The location will include a brewery, taproom, an outdoor patio and garden, as well as an in-house restaurant concept.

The new facilty will include a 4,200-square-foot taproom and brewhouse, plus a 5,400-square-foot patio which will connect to an open space and park area within the development. Denver Beer Co. will install a 7bbl brewing system from DME and brew fresh, location-specific brews on-premises, as well as existing Denver Beer Co. recipes. The taproom will have the capacity to hold 125 guests in the interior space as well as an additional 360 guests on two outdoor patio areas.

Confluent Development and Kelmore Development serve as co-owners and co-developers for the Exchange at Boulevard One. Gensler is the architect for the project and i2 Construction is the general contractor.

“This fourth taproom will be really special due to its location on the park within the Exchange at Boulevard One,” shared Patrick Crawford, co-founder of Denver Beer Co. “Folks will be able to grab a beer and bite to eat and sit on the patio overlooking the green space. You’ll be able to toss a frisbee around in between beers or let your kids run and play while you hang out on the patio. Ever since traveling to Germany, I’ve always dreamt of having a taproom adjacent to open space where you can sip beers in between yard games. I think this location will have a great dynamic in that regard.”

The 175,000-square-foot Exchange at Boulevard One project is the only commercial development at Boulevard One, the mixed-use community which will include retail, apartments, single-family homes and public spaces in Lowry’s newest neighborhood, serving 25,000 residents in 15,000 households. The project is supported by the Denver Urban Renewal Authority and Lowry Redevelopment Authority (LRA).

“Denver Beer Co. is a local brewery beloved by Denver’s communities, and we are proud to welcome them to Lowry in their continued expansion across this market,” said Nick Kitaeff, senior development director of Confluent Development. “With the addition of Denver Beer Co. as one of the final pieces of this project, the Exchange at Boulevard One is primed to become the well-rounded, vibrant hub for the community to work, shop, eat & drink that we’ve always envisioned.”

Growcentia Relocates its Headquarters to Centerra in Loveland