YOU ARE HERE:Home » Development » Denver Industrial Vacancy Rate Ticks Up in Q1 2019
DevelopmentIndustrialReports 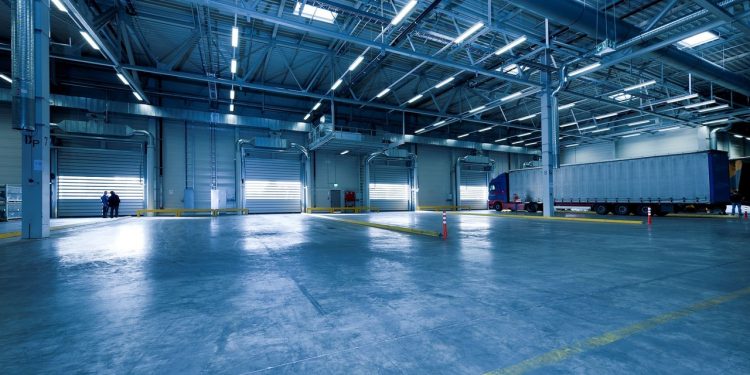 DENVER — According to Transwestern’s national industrial market report for the first quarter of 2019, the overall vacancy rate for industrial buildings ticked up for the first time in nine years, to 4.8 percent. Despite the increase, due in large part to speculative construction projects delivered to the market, net absorption remained positive as nearly half of the new product was preleased. Cushman and Wakefield’s 1Q Denver Industrial MarketBeat shows that vacancy in the Denver metro industrial market also recorded an uptick to start the year as it closed the first quarter 2019 at 5.1 percent on an overall basis. This figure represented a 40 basis point (bps) increase quarter-over-quarter and a 10 bps increase year-over-year from when vacancy closed the first quarter 2018 at 5.0 percent. Vacancy has fluctuated since the beginning of 2017 as a result of the massive amount of new construction that has delivered with limited preleasing activity, but has largely leased quickly once delivered. This trend continued as nearly 918,000 square feet (sf) delivered during the first quarter with overall pre-leasing of 26.4 percent. 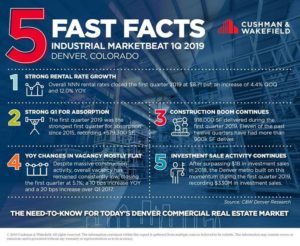 Metro-wide overall rental rates for all industrial product types continued to set record highs as they closed the first quarter 2019 at $8.71 per square foot (psf) on a triple net basis (NNN). This represented a 4.4 percent increase quarter-over-quarter from when rents were $8.34 to close 2018 and a substantial increase of 12.0 percent year-over-year from when rents closed the first quarter 2018 at $7.78 psf NNN

This increase has been primarily driven by rising rates in warehouse and distribution product which closed the first quarter 2019 at $7.18 psf NNN on an overall basis; an increase of 8.6 percent over the fourth quarter 2018 and 12.5 percent year-over-year. New product continues to drive rates higher and, despite the increased competition, landlords of older product have proven resistant to lowering rates to attract tenants. Rental rates will likely close 2019 higher than they were to close 2018, but expect slower growth compared to that seen over the past year.

New construction continues to deliver at a remarkable pace across the Denver metro area as more than 900,000 sf has delivered eleven of the past twelve quarters. During the first quarter 2019, nearly 918,000 sf delivered. Prologis Park Central was home to the most notable deliveries for the quarter as Buildings 1, 2 and 5 delivered 166,300 sf, 383,100 sf and 79,800 sf, respectively. Building 1 delivered 27.1 percent preleased to Gustave A. Larson Company and Buildings 2 and 5 delivered completely vacant, although Building 5 has a lease out for the entire building that is expected to sign early in the second quarter.

More than 4.1 msf of industrial product remains in the under construction stage of the pipeline, all of which is expected to deliver by the end of 2019. Roughly 3.6 msf of this product is spec and is collectively 10.6 percent preleased. As a result, expect vacancy to continue to fluctuate as this product delivers largely vacant throughout the year but should lease quickly. More than 60 percent of the nearly 17 msf that has delivered since the beginning of 2016 has been spec product. Expect future construction numbers to remain robust but skew more towards BTS product as a result of increased competition in spec product as well as development costs that have risen to the point that BTS projects are more financially feasible.