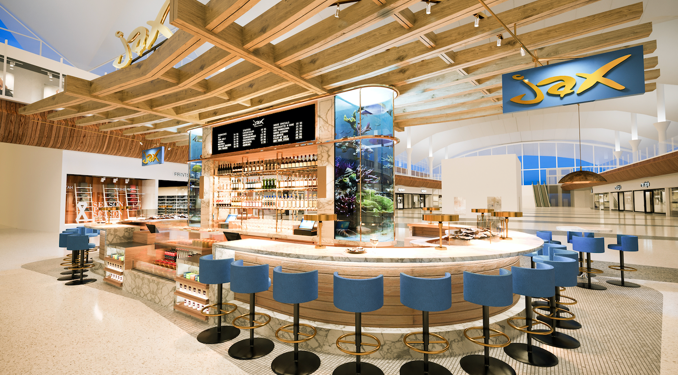 The year flew by, and Denver International Airport (DEN) is ready for takeoff in 2023. DEN is looking back on a year marked by accomplishments, milestones and opportunities. Among the most notable (in no particular order):

DEN’s air service network recovered to near pre-pandemic levels as new gate capacity at DEN supported carrier growth. Total nonstop destinations at DEN totaled 215 for the year, including 190 domestic airports in 46 states and 25 international destinations across 13 countries. DEN was the largest hub in terms of seats for Frontier, Southwest and United.

DEN continues to make significant progress on the Great Hall Project, particularly with the new Level 6 security checkpoints. This summer, DEN relocated approximately 20 airlines from the north end of Level 6 to the south end of Level 6. The relocations allowed DEN to start the construction of the new security checkpoints on Level 6 on both the east and west side. The Level 6 West Checkpoint is on schedule to be completed in Q1 2024 and the Level 6 East Checkpoint is on schedule for completion in mid-2026.

In addition to the security checkpoint work, DEN made tremendous progress on the new triple escalators that will take screened passengers on Level 6 directly to Level 4, where they will take the train to the gates. The main components of the 40-foot-long escalators were installed this year and will open in Q1 2024 along with the West Security Checkpoint.

The project also completed another set of escalators on the west side between doors 606 and 608 that connect passengers between Levels 5 and 6. With the opening of this new energy-efficient escalator, DEN welcomed back one of DEN’s gargoyles that watch over passengers’ bags in the terminal. The popular bronze sculpture is part of ‘Notre Denver,’ a public art installation by artist Terry Allen. The second gargoyle remains in storage while construction continues on the east side baggage claim area.

The entire Great Hall Project is still on schedule to be completed in summer 2028 with segments opening along the way.

Center of Equity and Excellence in Aviation Conceptual Renderings

In November, DEN unveiled its first conceptual renderings of the Center of Equity and Excellence in Aviation (CEEA). CEEA is a first-of-its-kind training center that will help create a pipeline of aviation talent in Denver and provide under-represented and young people opportunities for future careers in aviation. CEEA will also provide training opportunities for current employees, business development training, research partnership opportunities with local universities and more.

CEEA will be constructed within 66,000 square feet of space on Level 4 of the Hotel and Transit Center where there will be easy access to the commuter rail to downtown Denver. The focal point of the space will be the Hall of Equity, which will accommodate 300 people for training and educational purposes. Other adjacent lecture halls and training rooms will accommodate another 200-300 people. There will also be a pre-function and lobby space with a small café for networking and small group meetings.

DEN also announced that Studio Completiva, a minority-owned firm, was awarded the design contract through Stantec and Sky Blue Builders and will serve as the Minority/Women-owned Business Enterprises (MWBE) general contractor for the project. Construction is set to begin in late 2023 as part of the Great Hall Project.

In order to efficiently process approximately 13 million outbound bags annually, DEN made several upgrades to the baggage system this year:

DEN also received a $60 million grant from the Federal Aviation Administration for baggage handling system upgrades. This was the largest Airport Terminal Program discretionary grant in the country. The grant money will be used to replace required baggage handling system equipment that has surpassed its life expectancy, which supports TSA’s bag screening objectives before the luggage is transported to the aircraft. The existing infrastructure has been in place for more than 20 years and is near the end of its life.

The Gate Expansion Program constructed a total of 39 new gates across all three DEN concourses, increasing gate capacity by 30% and improving the passenger experience by adding new amenities, including three outdoor decks where passengers can enjoy Colorado’s weather and beautiful views.

The completion of the Gate Expansion Program continues to position DEN as one of the top international airports. In addition, DEN stays true to our Vision 100 pillars of growing our infrastructure and expanding our global connections.

This year, DEN was recognized by Global Traveler Magazine for Best Airport for Recreation in the Leisure Lifestyle Edition – a nod to our great shop and restaurant selections.

To carry forth DEN’s vision of providing excellence in service and support to the public, the airport created the DEN Community Advisory Committee (CAC). The CAC meets quarterly and provides insight, guidance and advice to advance DEN’s global reach, competitiveness and reputation as a leader in aviation as we prepare for 100 million passengers in approximately 10 years. The committee consists of 16 community members, representing counties in the Denver metro and Boulder market areas.

This year, DEN embarked on the largest Energy Performance Contract (EPC) ever performed in the state of Colorado. Through this effort, DEN will implement various measures that will significantly reduce energy and water use throughout the airport while also reducing our carbon footprint.

This initiative is the most impactful project ever undertaken to improve the airport’s sustainability, one of the guiding principles in our Vision 100 plan. The contract comes with guaranteed savings and system performance, pushing DEN forward in reaching our goal to become one of the most sustainable airports in the world.

DEN has also begun the regulatory closure of its oilfield operations, which is comprised of 64 oil and gas-producing wells. DEN ended the year having already permanently plugged 20 wells and received the State of Colorado’s approval to close 22 more. Additional approval to close the 22 remaining wells will be sought in the first quarter of 2023. DEN will meet or exceed the State’s rigorous closure standards as it works to close the operation by the end of 2023 and reduce its greenhouse gas emissions exposure risk arising from normal oilfield operations.

Standard & Poor’s (S&P) raised DEN’s ratings from A+ to AA- on its senior lien revenue bonds, and from A to A+ on its subordinate lien revenue bonds. DEN maintained a strong credit rating through the pandemic and the upgrade reflects DEN’s strong recovery back to pre-pandemic levels in 2022.

DEN released a Rolling Request for Offers (RFO) from qualified developers, investors and users for commercial development through one or more long-term ground leases of up to 1,500 acres of the airport’s non-aviation land.

Offers shall be reviewed by DEN Evaluation Committee for market competitiveness and based on selection criteria set forth in the RFO. There is no submission deadline. Although DEN can close the RFO at any time, DEN Real Estate anticipates keeping the opportunity open for multiple years to allow interested parties an opportunity to present ideas for commercial development at DEN.

DEN is proud to have been awarded the 2022 Leading Airport Fleet award by ACT Expo in recognition of the airport’s alternative and sustainable fleet assets. The award recognizes airport fleets that demonstrate leadership in alternative fuel and advanced vehicle technology.

Additionally, the airport completed its annual facility and operations inspection by the Federal Aviation Administration (FAA) and federal inspectors found no discrepancies between DEN operations and FAA operating standards. This is the second year in a row and the fifth time in six years that DEN has passed the annual inspection with no discrepancies.

Lastly, DEN has been recognized by the prestigious Frontier Awards as “Highly Commended” in the Airport of the Year category. The Frontier Awards are the longest-standing awards for the retail concessions industry. The awards recognize travel retailers, brands and airports that are committed to excellence and the collective raising of standards for the industry.