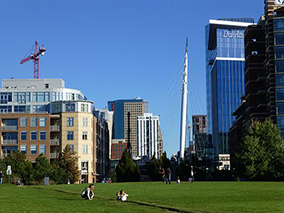 Denver, CO – Denver was one of 30 metro areas nationwide highlighted in the latest report released on June 14, 2016 entitled, Foot Traffic Ahead: Ranking Walkable Urbanism in America’s Largest Metros, released by LOCUS: Responsible Real Estate Developers and Investors, a program of Smart Growth America, in conjunction with the Center for Real Estate and Urban Analysis at the George Washington University School of Business (GWSB). The report ranks the country’s top 30 metropolitan areas based on the amount of commercial development in Walkable Urban Places (WalkUPs). Denver ranked #14 in current walkable urbanism with 90% of its WalkUP office and retail space located in the central party of the city. According to the findings in the report, Denver is predicted to rise to #9 in future walkable urbanism due to the city’s expanding light rail system. Belmar was also highlighted in the report as an example of a “wildly successful” regional mall conversion into a WalkUP in the suburbs.

Per the report, major findings include:

“In a sweeping survey of our nation’s top 30 metro areas, Foot Traffic Ahead reveals just how important Walkable Urban Places are,” said Chris Leinberger, president of LOCUS and author of the report. “As economic engines, as talent attractors, and as highly productive real estate, these WalkUPs are a crucial component in building and sustaining a thriving urban economy. Cities with more WalkUPs are positioned for success, now and in the future.”

“This is an important study underlining the economic power of walkable places, and identifying which metro areas are adding them fastest,” said Geoff Anderson, president and CEO of Smart Growth America. “Cities that want to thrive in our new economic and demographic realities will need to find ways to create and support more of these dynamic, productive walkable districts that are in high demand.”