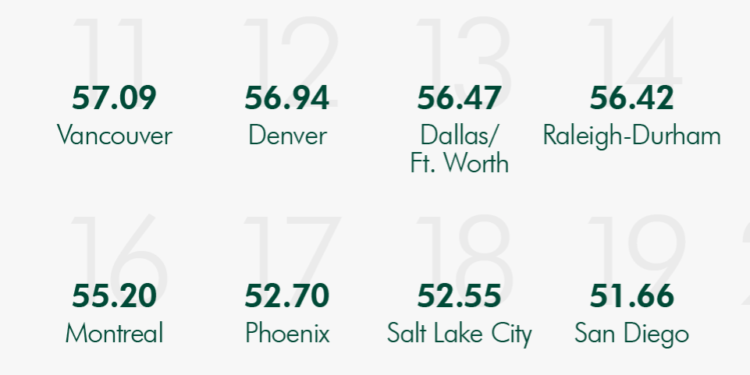 North American tech-talent employment weathered the pandemic better than most other professions, according to CBRE’s 2021 Scoring Tech Talent report. Despite slipping from its No.7 position in 2020, Denver currently has the 12th largest tech talent labor pool nationally with 114,900 tech workers and remains a top choice for tech companies.

“With an expanding talent pool, strong employee in-migration and affordable cost of living, Denver remains a top consideration for tech companies who are considering their expansion plans. The market’s tech talent base remains strong as we continue to move up in the report’s Brain Gain category, which confirms our ability to keep talent local by offering great employment opportunities. As we look at the continued trajectory of companies moving their headquarters to Colorado, we suspect that our tech talent pool will not only continue to grow, but also attract new types of talent that choose Denver as a home,” said Alex Hammerstein, senior vice president, CBRE.

Numerous indicators underscore the resilience of tech talent during COVID-19. These occupations registered job growth of 0.8 percent in 2020 in the U.S. while non-tech occupations declined by 5.5 percent. Software developers and programmers were the most in demand tech-job category last year, adding 85,000 U.S. jobs for a 4.8 percent growth rate from a year earlier. Beyond the tech industry itself, those that added tech workers last year include financial activities, professional & business services, and government.

Tech jobs account for 7 percent of total jobs in Denver’s workforce, 1.8 times higher than the national average of 3.9 percent. Following the pandemic, factors including the size of a market’s talent labor pool is a key indicator of a region’s economic recovery.

Denver stood out in the report in a number of other key areas: