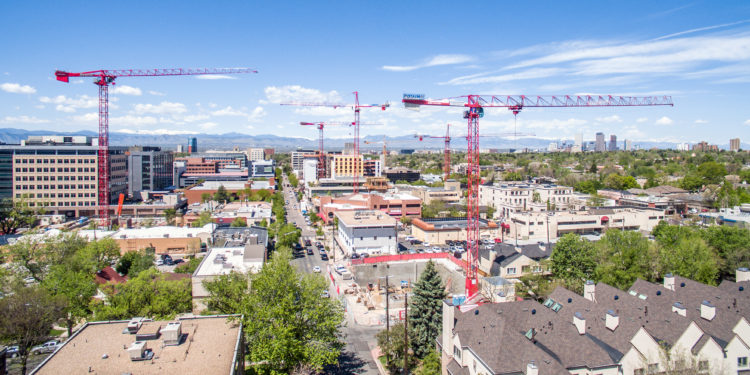 According to the report, there was a decrease in the quantity of cranes in Denver, due to several projects being completed or approaching completion. According to the Denver Metro Association of Realtors, there is still an increase in demand and shortage in supply of housing. This could mean that the crane count in the future could remain fairly constant if there is continued growth in the residential construction sector.

“The pandemic-induced recession is going to have far-reaching effects,” said Julian Anderson, FRICS, president of RLB North America. “Lenders are less likely to support large new developments in sectors that have been hard-hit, like sports and hospitality. As construction costs soften, we are already seeing more interest in the projects that are coming online.”

Each quarter RLB looks at the comparative cost of construction in 12 U.S. cities, indexing them to show how costs are changing in each city in particular, and against the costs in the other 11 locations. Between April 1, 2020 and July 1, 2020 the national average increase in construction cost was approximately 0.16% (compared to 1.3%, this time last year).

Denver, Boston, Los Angeles, New York, Portland, and San Francisco all experienced increases over the national average in the quarter. Denver’s construction costs increased 0.20% in the third quarter and between July 2019 and July 2020, cost increased 2.78%