YOU ARE HERE:Home » Development » Denver’s Livestock Exchange Building to be Restored
DevelopmentOfficeRenovation 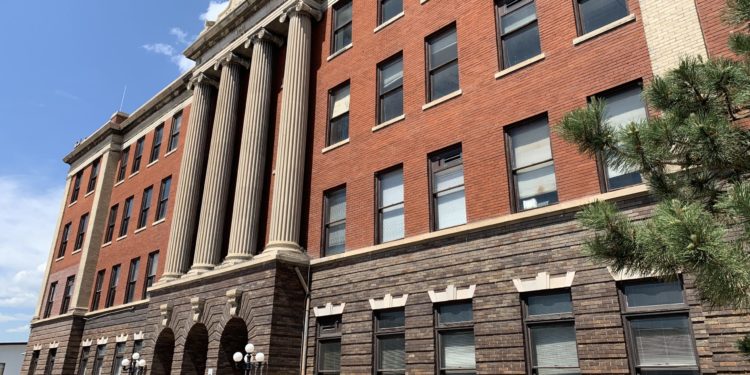 The rehabbed building will feature a mix of office and meeting spaces — with a focus on food and agriculture organizations whose work complements other happenings at the future National Western Center. The Colorado Cattlemen’s Association will occupy the building.

The Livestock Exchange Building is an icon of local agricultural heritage, and one of few remaining structures from the time the Globeville and Elyria-Swansea neighborhoods were the epicenter of the region’s livestock industry. Purpose-built beside the railroad, stockyards and nearby meatpacking plants, the building represented the administrative, financial, regulatory and social hub of the livestock trade for most of the 20thcentury.

The City and County of Denver selected the team through a competitive process that sought a purchaser to operate the property “in alignment with the objectives of the National Western Center master plan.” The purchase was finalized Nov. 30. The partnership will apply to designate the building a local landmark to ensure it will stand for another century and beyond.

“The Livestock Exchange Building is an unparalleled opportunity to link our region’s agricultural heritage to its future innovation,” said Brad Buchanan, CEO of the National Western Center. “The owners’ intent is to bring the building back to its rightful place at the forefront of the region’s food industry.”

When complete, the building and what happens inside will have a meaningful connection to the rest of the future National Western Center, which is envisioned as a global destination for food and ag innovation, western heritage and culture, set to open in 2024. Although the Livestock Exchange Building will be privately owned in the middle of the largely publicly-owned National Western Center campus, its main floors will be accessible to the public and its future tenants will complement the center’s event venues and educational and research spaces.

The building will again house the Colorado Cattlemen’s Association, which officed in the building for most of its history, including 41 contiguous years beginning in the early 1940s. It will also continue to serve as the headquarters for the National Western Center, which has officed there since May 2019.

“The Colorado Cattlemen’s Association has deep ties to the Livestock Exchange Building,” said Terry Fankhauser, executive vice president of the CCA. “For us, this is a homecoming.”

The building will continue to house the Denver Stockyard Saloon — the saloon that’s the current iteration of the structures’ string of restaurants, inns and watering holes that first served stockmen in 1898. The saloon’s current lease continues after the sale, and the partners hope to retain the saloon on-site indefinitely.

The owners are in talks with other businesses and nonprofits about leasing offices in the building.

Three connected wings comprise the building – built in 1898 (center), 1916 (east) and 1919 (west). The 1916 structure is the most visible and recognizable to Stock-Show-goers, and retains much of its original features and charm, inside and out. Floors, ceilings, staircases and wood trim are largely untouched. Wood, marble, granite and terrazzo finishes still grace the interior, and a second-story hall still features a chalkboard where livestock prices were listed.

The Denver Livestock Exchange was a nonprofit that from this building oversaw livestock sales at the stockyards from 1906 to 1962. The Stock Yards National Bank safes can still be found on the first floor. The longest tenant in the building was the Colorado Brand Inspection Board (1906 to 2015). Over time, ag-business uses and tenants left the building, and in recent years it has mainly been office space for a variety of private businesses. The City and County of Denver purchased the building in early 2019 from a private owner.