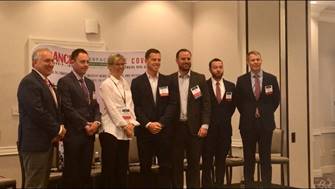 Meanwhile, condominium developers struggle to provide enough affordable units in part due to an increased cost of doing business. Shortage of skilled labor, rising cost of land and raw materials also contribute to the high barriers to entry for new projects.

To meet demand, condos need to be reasonably priced, said Kimberly Veazey, co-founder of AvenueWest Global Franchise. “It’s not going to be the $500,000 one-bedrooms,” Veazey said.

Most panelists agreed that condos have become increasingly unaffordable. “Stick-built condos still work very well and deliver that $300,000 to $450,000 unit that is in high demand,” said John Blackshire, vice president at Transwestern.

In addition to cost, the regulatory environment in Colorado has made providing housing within that price range difficult.

“Existing construction defects legislation plays an outsized role in adding to those costs due to the additional expense for excessive project level documentation and insurance in order to mitigate liability for the builder,” Gause said.

To create more affordable living, developers are expanding their offering to include microunits, co-living units and coworking spaces. According to TREPP, funding for co-living development in the U.S. has recently seen a massive spike, jumping from $134 million in 2017 to $2.9 billion in 2019, with an additional $283 million in the pipeline.

“Microunits and co-living are an interesting solution to the problem of providing affordable housing for young professionals who do not meet standard eligibility criteria for income-restricted housing developments but still want to be able to access all the amenities of the urban core,” Gause said.

Micro-apartments can relieve some of the financial burden, associated with housing costs. They are $300-$400 cheaper than full-sized units in Denver, Blackshire said.

Developers will continue to expand their offering to include microunits, co-living units and coworking spaces, experts predicted.

“This adult-dorm-room living,” Veazey said, is a growing trend.

Stantec Leading Design for Upgrade to McMurdo Station in Antarctica