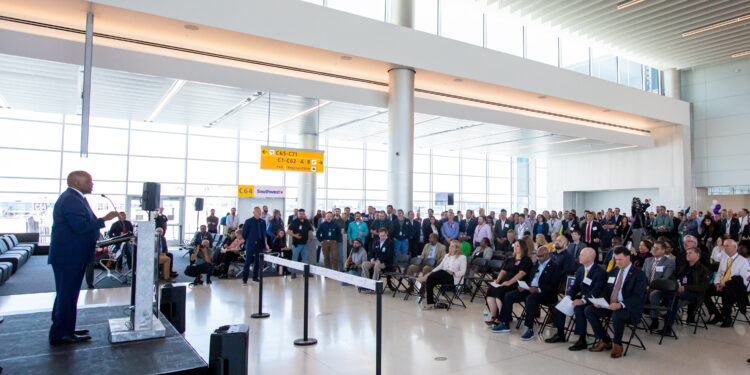 Last week, Mayor Michael B. Hancock joined Denver International Airport (DEN) and Southwest Airlines for a ribbon-cutting ceremony celebrating the completion of 16 new gates on Concourse C. The new gates are being leased by Southwest Airlines and will allow the airline to continue growing its operations at DEN.

“Denver International Airport is our region’s and Colorado’s largest economic engine, and these investments are critical to keeping that engine running to support our entire city and state,” said Mayor Michael B. Hancock. “These new gates will bring more flights, jobs and economic opportunities to our region, while making even more destinations accessible for our residents, and making Denver even more accessible to travelers from around the world.”

The C-East expansion area broke ground in early 2019 and has been managed by the Holder-FCI joint venture that also manages expansion work on Concourse B-East. Jacobs was contracted for architectural and design services for the project, and WSP serves as DEN’s Program Management Team (PMT).

The expansion area includes 16 new gates, 20 holdrooms (passenger waiting areas at gates), and additional airline support areas for a total of 530,000 square feet, which is the largest space commissioned by DEN since the Westin Hotel and Transit Center in 2015. Passenger amenities include an outdoor patio, comfortable seating options, charging stations, new restrooms, nursing rooms, pet relief areas and so much more.

“The Gate Expansion Program is just one way we are growing our infrastructure to ensure we are prepared for 100 million passengers in the next 8 to 10 years,” said DEN CEO Phil Washington. “These new gates will not only allow one of our largest carriers to expand at DEN but provide our passengers with more options and an improved experience.”

All 16 gates in the C-East expansion area have already been leased by longtime DEN partner, Southwest Airlines, which is expected to begin operating out of the new gates in late May or early June. Once the gates become operational, two of the new 16 gates will remain closed for several months to allow alignment and tie in with existing gates and new holdroom construction. The final two gates and additional holdrooms are expected to be operational by October.

“Our Mile High Heart is beaming with pride as we introduce our customers and employees to this exceptional expansion, which gives us the ability to continue growing and serving our Denver customers,” said Steve Sisneros, vice president of airport affairs at Southwest Airlines. “With the opening of the gates, we continue partnering with DEN to design and build larger and modern facilities to support our long-term vision in Colorado which includes our recently opened Maintenance Hangar complex, and buildings for our Provisioning, Cargo, and Ground Support Teams, and a larger People Department to support our robust recruiting efforts.”

Much like the expansion on B-West, the C-East gates reflect DEN’s commitment to sustainability and is expected to be LEED Gold Certified. Sustainability features of this expansion area include a rooftop solar system with the capability to generate nearly 355 kilowatts of electricity. Additionally, the project was designed with energy efficiency in mind and is projected to reduce energy use of the facility by 30% over conventional design. Low flow fixtures, toilets, and urinals are projected to reduce water use in the facility by approximately 47%.

These 16 new gates are part of the Gate Expansion Program which constructs 39 new gates across all three DEN concourses, increasing gate capacity by 30% and improving the passenger experience by adding new amenities, including three outdoor decks. The C-East expansion is the second of four expansion areas to be completed with the remaining two areas on Concourses A-West and B-East opening this fall.

The original budget for the Gate Expansion Program was $1.5 billion to construct 39 new gates. Once the gates were officially leased to United and Southwest, DEN added work to the program to accommodate the relocation of various airlines to other gates. This work includes the buildout of a new commuter facility, new airline support spaces, a new club for American on Concourse C and gate modifications and technology upgrades. The additional budget also allows for the construction of the ground load facility including five new gates for Frontier Airlines. As a result, the program budget is now approximately $2.3 billion. DEN is an enterprise of the City and County of Denver and does not operate using General Fund tax dollars.