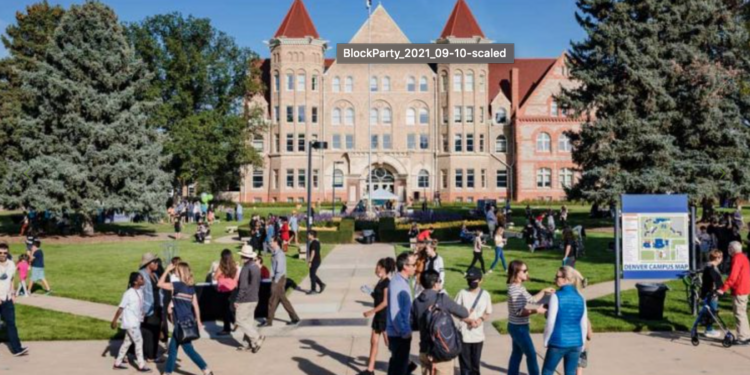 The new name was attained through an open six-month community process led by the Watson Wenk Group. It was selected from among more than 110 suggestions submitted by community members and vetted by a 14-member Renaming Committee, including representatives from each of the campus organizations, surrounding neighborhood organizations, and the three former colleges (Johnson & Wales University, Colorado Women’s College, and University of Denver Law School). Additional vetting and guidance were provided by Historic Denver, Blair Caldwell Research Library, and History Colorado.

“We are very excited about the name, Mosaic Community Campus,” said Aaron Martinez, vice president of operations and sustainability for ULC and president of the newly formed Campus Owners’ Association. “When we were considering the final list of potential names presented by the Renaming Committee, ‘Mosaic’ stood out as the clear front runner. It perfectly embodies the campus goals of providing an accessible community hub for quality education, economic development, and affordable living opportunities for people from all socioeconomic backgrounds, races, and ethnicities.” Other Owners’ Association board members include Sara Walsh, representing Denver Public Schools, and Erin Clark, on behalf of the Denver Housing Authority. Erin played a key role in campus acquisition as VP of master site development for Urban Land Conservancy.

After the acquisition last summer, St. Elizabeth’s School began the work of renovating Centennial Hall for the 2021-22 school year, which commenced in mid-August. While the school’s playground was being built, students experienced recess on the campus green space (Quad), a vast difference from their more condensed previous location on York Street. St. Elizabeth’s is in a lease-to-own contract with ULC, as is Kitchen Network (KN), a nonprofit which operates under the umbrella of BuCu West. KN also kicked off its programming last summer utilizing the 13 kitchens between the state-of-the-art Culinary Building and Vail Hall to expand programs and partnerships with hundreds of food service organizations, restaurants, and catering companies, including Dirt Coffee and Work Options, as well as D Bar, Faeth, Cholon Restaurant Concepts, Food Business Consulting, and many small business concepts.

For both Denver Housing Authority and Archway Communities, plans are underway to convert the six existing dorms into affordable housing for individuals and families. Lakewood-based Archway Communities will renovate the four buildings on the east side of the campus and have already been approved for 4 percent Low Income Housing Tax Credits through the Colorado Housing and Finance Authority (CHFA) for two of those buildings. Denver Housing Authority will renovate two former dorms on the south side of the campus into affordable homes.

Denver School of the Arts will accommodate students on the Mosaic Campus over the next two years, effectively expanding their enrollment to meet the needs of more students, with a focus on equity and inclusion.

To recognize this new era and those who have contributed to it, ULC and campus partners are working with arts nonprofit Platte Forum to design a public art structure that will be built on the central campus quad. The sculpture will be developed with community involvement and unveiled at a campus dedication ceremony and community-wide block party to be held in late September of this year.

Why Boutique Development Could Be the Future of Multifamily in Denver