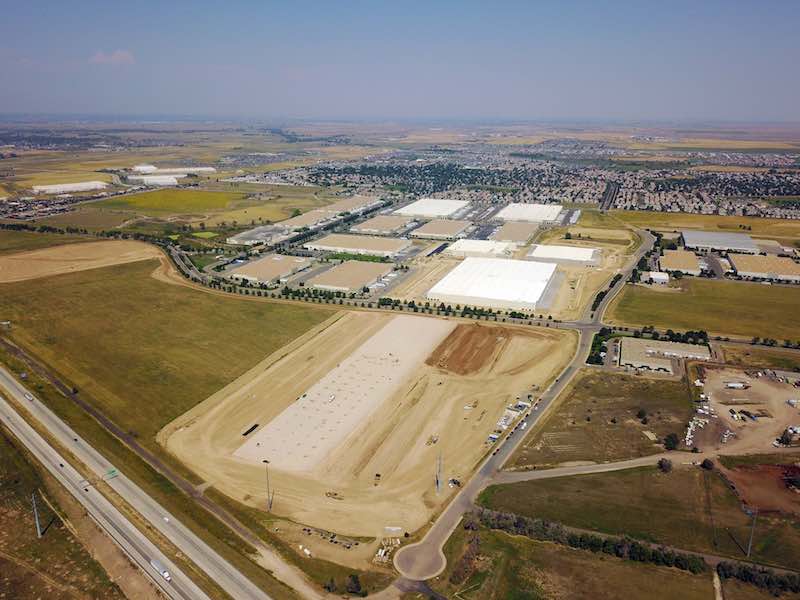 The 701,900-square-foot Building #15, nicknamed the “Big Bomber,” broke ground in late June and is scheduled for completion in early 2018.  Representatives from the City of Aurora, including Mayor Steve Hogan, as well as leaders from the Aurora Economic Development Council and area businesses, joined Majestic Realty Co. representatives to celebrate the milestone development at a Majestic Commercenter ceremony last week.

“Development of any size or type involves calculated risks,” said Majestic Realty Co. Executive Vice President, Randy Hertel. “But the highest risk is in speculative development and it’s something we’ve done well for a very long time.  We’re excited to celebrate this latest success with members of the community and elected officials.”

The building is being constructed on 36 acres of the 1500-acre Majestic Commercenter, located at the intersection of I-70 and Tower Road in Aurora. The property will feature 36-foot ceiling clearance, 146 dock doors, 198 trailer parking spaces and 426 car spaces. Designed for larger users, it will be divisible for multiple tenants down to 150,000-square-foot users. Construction and architecture will be completed by Commerce Construction LP, a subsidiary of Majestic Realty CO.

Majestic’s latest announcement breaks the company’s streak of speculative development records dating back to 2013, including a 452,400-square-foot building preleased by Amazon for its sortation center, thus establishing its initial roots in Colorado and a three-building phase totaling 834,000-square-feet that broke ground in fall 2016.  It is currently 65 percent pre-leased with several other leases nearing completion.

“Majestic Realty’s continued commitment to industrial development in Aurora has not only helped attract a number of companies including Amazon, but has strengthened our city’s reputation on the national and global stage,” says Aurora City Mayor, Steve Hogan.  “We appreciate Majestic’s leadership and look forward to celebrating the groundbreaking of its latest speculative project.”

Majestic has been the City of Aurora’s largest industrial developer over the past two decades and has nearly doubled its closest competitor in total square footage during that time. The Majestic Commercenter is home to 50 companies and more than 3,000 employees.   Since purchasing the park in 1995, Majestic Realty has invested more than a quarter of a billion dollars in the Aurora market through its buildings and land acquisitions, including its 2015 acquisition of an additional 500 acres directly adjacent to the original Commercenter park.

“It’s hard to underscore the positive impact Majestic has had on Aurora and Adams County’s economies,” said Aurora Economic Development Council President & CEO, Wendy Mitchell. “The commitment to speculative development on this scale, despite the associated risks, continues to allow us to compete to bring companies and jobs to our city.  We have the right assets including a talented workforce, real estate and developments, transportation infrastructure that aligns with industrial needs, and strong partnerships that drive comprehensive economic development.”