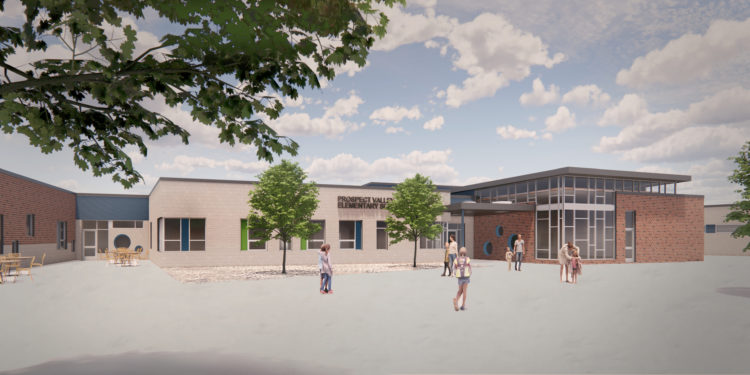 GH Phipps recently joined Jefferson County Public Schools officials and educators to celebrate the groundbreaking of the new Prospect Valley Elementary School in Wheat Ridge. The new school will replace the existing structure that was built in 1967. The project architect is MOA Architecture.

The new $20 million dollar school is an outcome of a 2018 bond and will total 60,000 square feet with modern upgrades and facilities.

Replacing the existing school facility, this new building provides an elementary school program in Wheat Ridge with much-needed additional classroom space and room for expansion. In designing the school, the MOA team focused on developing a highly efficient floor plan with core community spaces located at the center of the building, building on the school’s strong sense of community. The building also incorporates a variety of breakout spaces, creating connections to the outdoors. The building design incorporates playful elements with circular windows and bright “pops” of color that enliven the façade. The library media center, with its large glass walls, serves as a “beacon” for the school, clearly indicating the entrance.

The site design and building orientation balance several key factors, including the need for the existing facility to remain operational during construction and a significant grade change across the site. The new building navigates the grade change by building a two-story classroom wing directly into the hillside. The site plan also provides space for a future classroom wing and the opportunity to convert existing classrooms into a pre-K program.

Construction is scheduled for completion during the third quarter of 2022.