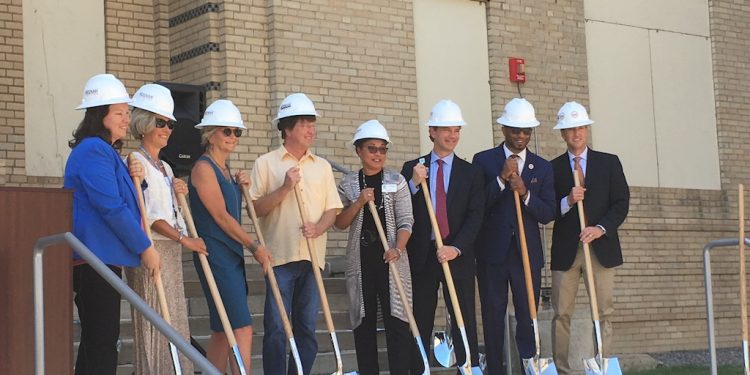 In the midst of Denver’s significant lack of affordable housing, the historic Tammen Hall redevelopment supports one of the most vulnerable segments of Denver residents – seniors.

DENVER — The Tammen Hall redevelopment project broke ground yesterday on the Saint Joseph Hospital campus in Denver’s City Park West neighborhood. MGL Partners and Solvera Advisors LLC will develop the project, with The Neenan Company serving as the design-build partner for the renovation of the historic landmark.

In the midst of Denver’s significant lack of affordable housing, this project supports one of the most vulnerable segments of Denver residents – seniors. The property will provide 49 rental apartments for income-qualified seniors 62 years of age and older.

Saint Joseph Hospital sold the building to MGL Partners/Solvera Advisors in 2017, with its parent organization, SCL Health, providing a substantial investment to finance the redevelopment. Additionally, MGL Partners/Solvera Advisors has received an allocation of 4 percent Federal Low Income Housing Tax Credits from the Colorado Housing and Finance Authority – which were purchased by Midwest Housing Equity Group and Advantage Capital – and received a loan from the Denver Office of Economic Development. Colorado Housing and Finance Authority also issued Private Activity Bonds, purchased by CITI Community Capital. In addition the Denver Housing Authority will also be a partner in the project. The project is one of 12 selected statewide for State Low Income Housing Tax Credits from Colorado Housing and Finance Authority in 2017. The project also receives support through State and Federal Historic Preservation Incentive Tax Credits.

“The mission of SCL Health and Saint Joseph Hospital is to improve the health of the people and communities we serve, especially those who are poor and vulnerable,” said Saint Joseph Hospital President Jamie Smith. “We are so pleased to be a partner in this redevelopment effort that aligns with our mission and contributes toward finding a solution for the significant need for affordable housing in our community for seniors.”

Located at 1010 E. 19th Avenue, the eight-story, 52,000-square-foot facility will feature common areas on the first floor, one- and two-bedroom apartments on the second through seventh levels, and the top floor will include a common area and rooftop patio for residents. With the aim to revitalize the currently unoccupied building in Denver, the project is planned for completion in mid 2019.

“Tammen Hall represents a huge win preserving Denver’s culture and character, while boosting the availability of much-needed affordable apartments for fixed-income seniors,” said Denver Mayor Michael B. Hancock. “This is infill development at its best, and we’re proud to support the next chapter of this structure and deliver more housing solutions for Denver’s people.”

Originally built in 1930 as a nurse dormitory for Children’s Hospital Colorado, Tammen Hall was named after Harry Tammen, the first publisher of The Denver Post. Designated as a local historic landmark, the exterior and internal renovations will comply with National Park Service standards. Among the spaces to be preserved are a theater and a community room that will be available for neighborhood meetings and events, along with the historic entry and foyer. A rooftop deck will be added where residents will enjoy mountain and city views.

“MGL Partners and Solvera Advisors are especially excited about the Tammen Hall restoration as it takes a step to help solve multiple issues facing the neighborhood and the city of Denver as a whole,” said Kurt Frantz, development manager for MGL Partners. “First and foremost it provides senior affordable housing in a neighborhood where aging residents have to relocate outside of the neighborhood to find similar affordable housing. It also repurposes and activates a significant historic building in central Denver that is has been vacant and boarded up for more than 10 years.”

“We’re thrilled to support such a meaningful project among Denver’s thriving development scene,” said David Shigekane, president of The Neenan Company. “Not only are we helping to preserve an important piece of Denver’s heritage, but the project will surely play a significant role in Denver’s future.”

Photo courtesy of The Neenan Company