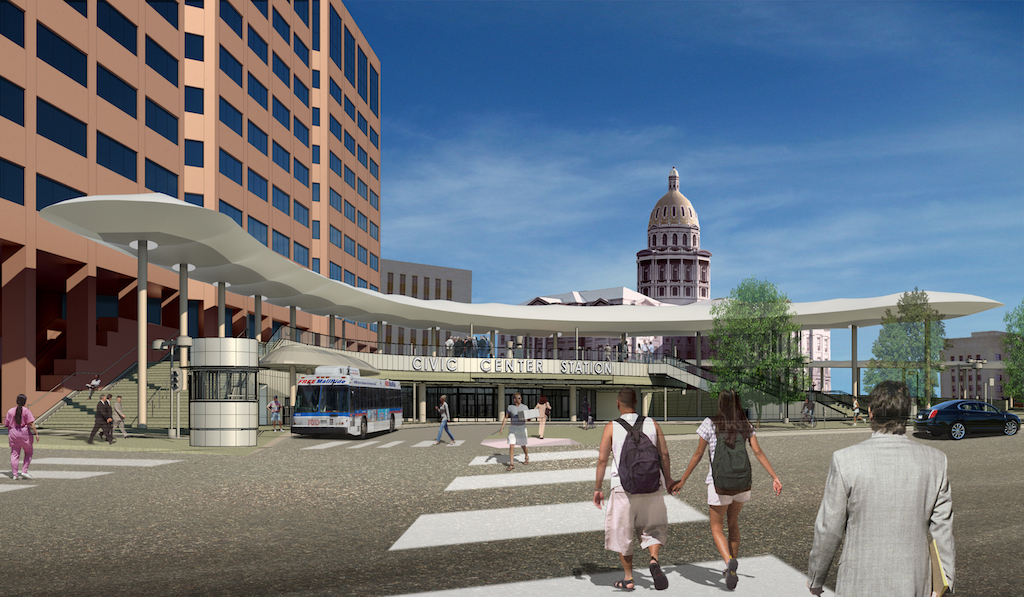 DENVER – Work on the Regional Transportation District’s Civic Center Station has been progressing steadily over the past 15 months, with completion approaching later this year. A notable milestone on the approximately $31 million project is taking place now: installation of three iconic canopies framing views of the Capitol, the 16th Street Mall and Civic Center Park. The fabric is the same as that used at Union Station and Denver International Airport.

Mortenson is a U.S.-based, family-owned construction and development services company is the GC for the Civic Center Station project, Perkins Eastman and SEH are the architects and Martin/Martin is the structural engineer.

Civic Center Station serves as one of RTD’s busiest regional bus transit centers with eighteen routes serving an average of 15,000 passengers a day. It provides a turnaround point for the 16th Street Free MallRide and is also the location of the Civic Center Plaza. RTD initially embarked on the Civic Center Station project because of a dire need for structural repairs and waterproofing. The new structure will be easier to maintain and repair long-term. The canopies are illustrative of overarching direction that the new Civic Center Station be transparent and open. The terminal building will be enclosed by glass and features an expansive, elevated terrace. Additional details about the project – including its effect on bus service – can be found at the link above.

What: Installation of canopies framing views of the Capitol, the 16th Street Mall and Civic Center Park