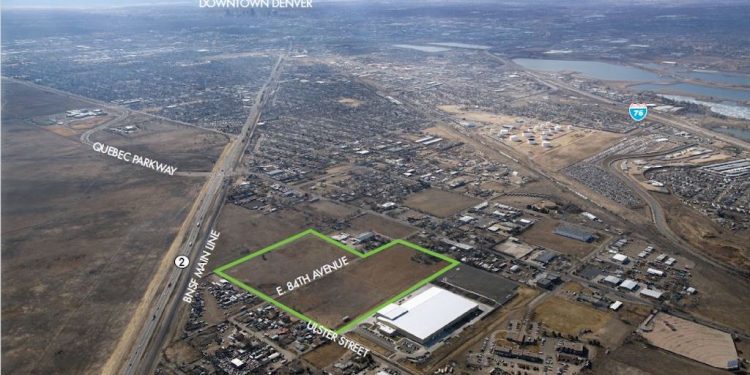 Intsel Steel West will occupy 22 of the park’s 55 acres with the remaining 32.5 acres available for sale or build-to-suit development.

DENVER – A new 55-acre in-fill, rail-served industrial development is coming to the I-76 corridor in Commerce City. Mid-Rail Industrial Park as it will be called, will be the first new construction project to offer railway access to central Denver in recent memory.

CBRE’s Jim Bolt, Mike Camp and Todd Witty are marketing the site on behalf of the land owner, Mid-Rail Real Estate, LLC, which is affiliated with Gary Stein of Houston’s Triple-S Steel Holdings. Triple-S, locally operated as Intsel Steel West (formerly R&S Steel), will occupy 22 of the park’s 55 acres with the remaining 32.5 acres available for sale or build-to-suit development.

“Rail sites typically sit on the outskirts of metro areas, so the fact Mid-Rail Industrial Park is coming to North Central Denver presents a real differentiator for companies. Not only can industrial users be closer to the population they serve, but they can also take advantage of the significant cost savings of rail transit and the chance to build from the ground-up to their specific needs. It’s a great fit for suppliers associated with the construction industry that depend on the low-cost delivery of materials and are facing unprecedented demand in the wake of Denver’s population growth,” said Todd Witty, first vice president, CBRE Industrial & Logistics in Denver.

According to CBRE research, transportation costs account for approximately half of an industrial operation’s total costs. More companies have turned to rail service in recent years as a way to mitigate that spend.

“Rail access is particularly relevant to industries who rely on materials supply, like construction. Most building materials arrive via rail, including lumber, steel, rebar and concrete components. For companies not located along a rail line, they have to pay for more expensive methods of transportation, driving up their overall costs. In a market like Denver, where our development is being stymied by rising construction costs, any tactic suppliers can take to reduce costs has the potential to create a huge competitive advantage,” added Mr. Witty.

The Mid-Rail Industrial Park sits adjacent to the BNSF railway, which follows Highway 2 in North Central Denver. The remaining acreage available for sale for build-to-suits or for lease is divided into two portions: 17 acres on the north side of 84th Avenue and 15.5 acres on the south. Syracuse Street borders the property to the west and Ulster Street to the East.

“The site’s proximity to both the BNSF rail line and Highway 2 was what initially attracted us to this location,” said Sam Stein, a project manager for Triple-S. “The rail spur allows us to bring in product from vendors across the country, and the easy highway access helps us serve our customers all over Colorado as well as other states such as Wyoming and Montana.”

CRE Community Raises $25,000 for the Brain Injury Alliance of Colorado