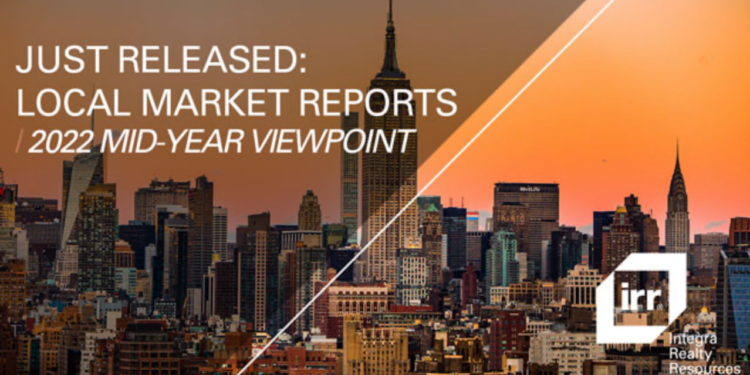 In total, 240 detailed reports covering 60 U.S. markets across four property types, including office, multifamily, retail, and industrial, have been released. Along with the local market reports, IRR has released a summary document that includes updated property summaries, market cycle charts, and market rents and vacancy rates comparison charts for each of the four property sectors.

The reports can be downloaded for free. To view the summary report, visit www.irr.com/research. To view local market reports, visit each office landing page and scroll down to the research section.

“We are proud to offer these insightful mid-year market reports to our valuable clients and partners who count on them to make informed real estate decisions,” said Anthony M. Graziano, MAI, CRE, CEO of Integra Realty Resources. “Through April 2022, Integra observed the commercial market showed few signs of restraint, however, the second quarter surely slowed deal-making. While the performance of different asset classes vary depending on supply and demand dynamics in each local market, overall, we expect the back half of 2022 and most of 2023 to be turbulent. This will create opportunity for disciplined investors and normalize pricing to stay in balance with economic productivity and business activity following two years of aberrant government financial intervention. A reset on real estate values is a necessary component of managing inflation since occupancy costs affect consumer spending and the production costs of goods and services. In other words, the quicker we take our medicine, the quicker we can return to stability.”

Below are a few highlights from IRR’s mid-year reporting: