YOU ARE HERE:Home » Design » Keiding Gives Office Building in DTC a Refresh
DesignDevelopmentOfficeRenovation 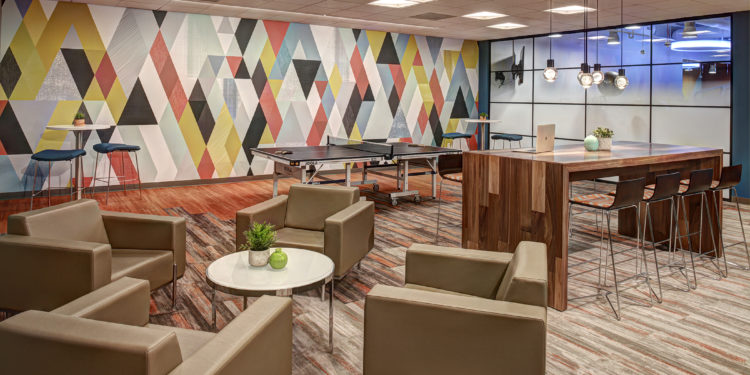 Bright colors and bold patterns accent variable seating and table types, which support both work and leisure activities. Semi-frosted windows at the rear of the space reveal location of adjacent fitness area.

Despite the rapid pace of new office buildings coming online across metro Denver, the bulk of that inventory still is dominated by 1980s and 1990s product. Consequently, owners of those and other older buildings have been rushing to improve the quality of their assets in order to compete with each other, and with owners of newer and more efficient properties.

This, in turn, has fostered a sharp rise in building renovations, especially in the way lobbies and common areas function. In one respect, the word “renovation” might conjure up images of vast retrofits in expansive downtown office buildings. While that is certainly true, suburban buildings are in the hunt, as well. They must be in order to compete. But those lobbies and common areas are a different animal, especially in the southeast suburbs, Denver’s largest submarket.

Suburban buildings are usually smaller in scale than their central business district brethren. And so are the lobbies and common areas. That is the case at 7595 Technology Way in the Denver Tech Center. The 191,402-square-foot building, constructed in 1999 needed an interior refresh, and crucially, better on-site amenities. 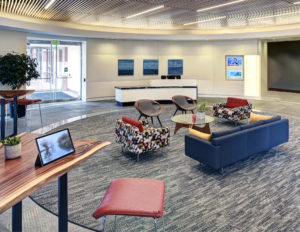 Kieding, a Denver=based commercial interior architecture and design firm, began the renovation by energizing the 1,500-square-foot circular main lobby. Live-edge natural wood tables with bar-height seating and integral power along the window perimeter complement a seating cluster with mid-century modern accents at the center of the space. With virtually no other common area options available to renovate on the ground floor, the landlord and property management team turned to rentable space. Since lobbies and other common areas do not generate rent, it can be a significant risk to sacrifice rentable square footage for amenities.

The solution entailed cutting into a portion of the lower level that had previously been a tenant space. With the existing training room on the lower level, it made sense to capitalize on the flow of common amenities in one area.

“The building owner and property management team were committed to improving recruitment and retention,” said Kim Hoff, design director with Kieding. “They didn’t hesitate in seeing the value of amenities in today’s office buildings.”

By downtown high-rise standards, renovations of this type can be modest in both scale and cost. On the other hand, by swapping out some rentable square footage for high-quality amenities, the renovation team was able to activate newly-designed spaces which engaged tenants, improved retention and increased the value of the property.