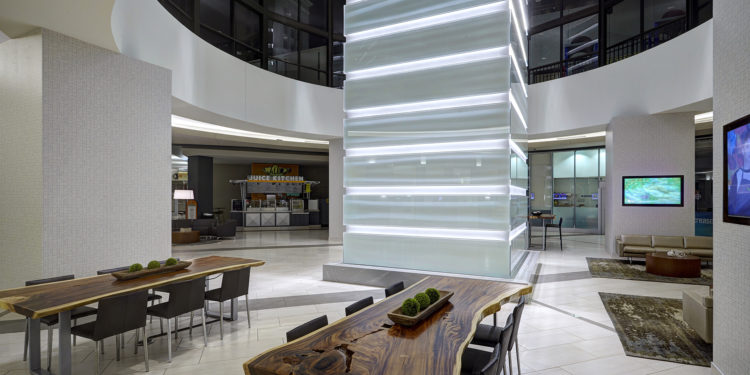 Kieding, a Denver-based interior architecture and design firm has completed the renovation of the 8,700 square foot Independence Plaza lobby. Built in 1972, the Class A LEED Gold Certified building spans 25 floors at 1050 Seventeenth Street, Denver. Although the building has been well-maintained, the lobby needed a modernization to compete with other similar properties and new buildings in and around Denver’s Central Business District.

The expansive lobby features a dramatic circular soffit dominating the whole of the space. At the center of the soffit — sometimes referred to as “the mothership” by management — is the new elevator feature. Kieding’s design called for back-painted glass panels wrapping around the structure, which measures eleven feet on each side and 34 feet high. LED strip lighting behind the panels lends a low-impact glow to the entirety of the tower. The elevator’s location near the back of the lobby is a natural gathering space where a variety of seating choices are available for both work and leisure.

The project team overcame a number of significant challenges at the very outset of the project. Although the schedule was phased, there were numerous unforeseen barriers within and under the existing elevator core, any one of which could have delayed the completion date. MDP Engineering handled the mechanical, electrical and plumbing while Vertex served as the general contractor.

“I know it’s a cliché, but this project could not have been completed on time and on budget without the strength and flexibility of our partners,” said Kieding Design Director Katie Winter. Vertex also had to build temporary walls with graphic signage around the work area to keep out noise and dust without closing off elevator operations during the remodel period.

The completed project maintained the integrity of this downtown Denver landmark property by seamlessly matching the lobby elements to the existing architecture of the building.