YOU ARE HERE:Home » Construction » Kiewit’s Regional Headquarters Tops Out
ConstructionDevelopmentEngineeringEvents 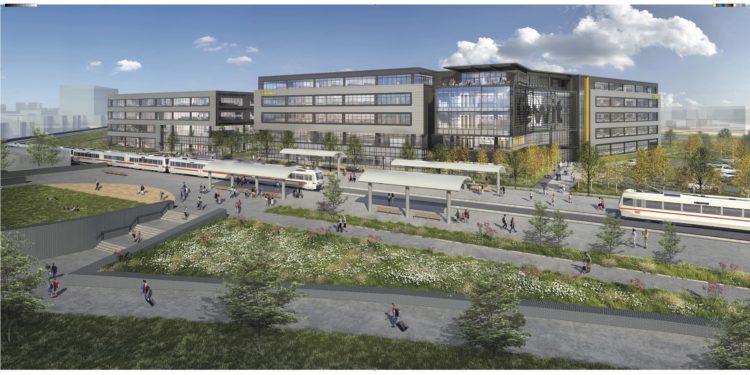 A rendering of Kiewit's 252,000-square-foot regional headquarters, courtesy of Stantec.

Today, Kiewit Corporation, one of the largest construction and engineering organizations in North America, celebrated the topping-out of its new 252,000-square-foot regional headquarters in Lone Tree’s RidgeGate community. The new headquarters will provide a central hub for the company’s existing Colorado-based staff of 900, who are currently spread out across the state in a number of leased office spaces, as well as strengthen its in-house engineering capabilities. 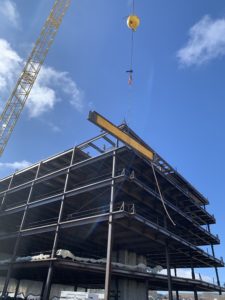 Ahead of schedule, the final beam is placed for Kiewit’s regional headquarters development.

Ahead of schedule, the project’s final beam was placed in front of a crowd of Kiewit employees, construction crews and City of Lone Tree officials, including Mayor Jackie Millet. Kiewit’s own building group serves as the general contractor for the project and Stantec is the architect.

This first phase of construction is expected to be completed in summer 2021, with plans to break ground on a second building this summer as part of the campus build out.

“The new regional headquarters campus allows Kiewit to come together, to root our company in a community that has a bright future, and one that will help Kiewit attract and retain top-tier talent,” said Chris Kelner, national director of preconstruction. “In just the last year, we’ve added hundreds of employees here in Colorado to meet increased demand, and that trend doesn’t appear to be slowing. We’re optimistic about this next chapter, which is strengthened by the support of the City of Lone Tree, whose partnership will help ensure our people and our company can prosper alongside this community.”

For nearly 80 years, Kiewit has maintained a strong workforce in Colorado to lead many of the major projects that have supported the state’s exponential growth — from the Interstate 25 expansion with T-REX to Union Station transit improvements. Today, Kiewit continues to have an impact on economic development in the area. The company is behind a number of new projects that support thriving businesses and communities in Colorado, including major redevelopment projects in the metro area: the 9th and Colorado mixed-use neighborhood and Market Station in downtown Denver.

Kiewit first announced plans to locate its regional headquarters in Colorado last spring. The company cited the metro area’s strong economy, educated workforce and proximity to institutions of higher education that are producing a next-generation workforce in key industries on which Kiewit is focused. The City of Lone Tree also provided desirable options for employees to live and work in close proximity, which helps attract new talent and supports retention as a number of current employees already live in RidgeGate and near-by communities.

“We’re thrilled to welcome our newest neighbor, Kiewit Corporation, to the City of Lone Tree and look forward to seeing the vision for this campus come to life over the coming year,” said Mayor Jackie Millet. “Kiewit’s commitments in the city will have a direct and lasting impact, both economically in terms of job creation and growth but also socially as the individual contributions of Kiewit employees, and their families undoubtedly will make Lone Tree a more desirable place to live and work.”

Kiewit’s new regional campus is situated on 12.6 acres of land just west of Interstate 25 at the Lincoln Avenue interchange. The convenient location within the mixed-use, master-planned RidgeGate community will provide current and future employees with close proximity to housing and transportation options, and easy access to I-25 and the Sky Ridge light-rail station.