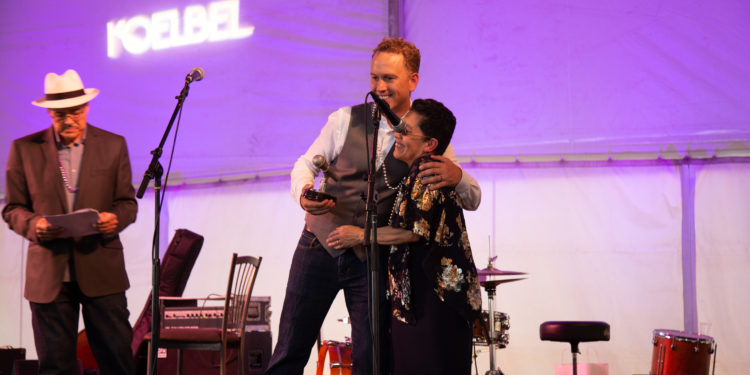 With the move to the Buell Public Media Center in 2020, Koelbel will join the long list of legacy investors in KUVO who have been instrumental in the preservation and celebration of jazz in Colorado. The current KUVO broadcast studio, which was originally named after KUVO founder Flo Hernandez-Ramos – will now be the new Koelbel KUVO Studio. In honor of her indelible mark on Colorado, and on KUVO, Rocky Mountain Public Media will be naming the new KUVO community reception space after Hernandez-Ramos.

The Hernandez-Ramos and Koelbel families were recognized for their KUVO support on Aug. 10 at Live at the Vineyards 2019 at Balistreri Vineyards, a fundraising event featuring Kermit Ruffins & the Barbecue Swingers, a wine tasting, gourmet meal and silent auction.

“We have a proud 33-year history of cultural influence in Colorado, and this generous gift from Koelbel and Company carries forward KUVO’s legacy of family support for jazz in our community,” said Amanda Mountain, president and CEO of Rocky Mountain Public Media. “The Koelbel family’s long history of community investment through generations of philanthropy makes them a perfect partner for KUVO. Their investment continues the founding vision of KUVO as a central venue for jazz set by the Hernandez-Ramos family more than three decades ago.”

Since its founding, Koelbel and Company has focused on responsible corporate citizenship and maintains a philosophy that investment in the community, state and country builds a foundation for the future. It has a long history of supporting education and culture in Colorado and is committed to these ongoing causes.

“Education and cultural advancement have been Koelbel family priorities for decades. We have a great appreciation for the impact of KUVO in the Denver – and larger – community. Supporting this cultural gem is a natural extension of our philanthropic mission,” said President and CEO Walter A. “Buz” Koelbel. “We look forward to partnering with KUVO and RMPBS to further their cultural and education impact in Colorado and beyond – for many years to come.”

KUVO’s founding dates to 1983 when Hernandez-Ramos, along with her family and numerous volunteers, started fundraising and organizing a new radio station that would be a bilingual service by and for Latinos in Colorado.  KUVO hit the airwaves on 89.3 FM in 1985, with Hernandez-Ramos serving as the station’s general manager for 23 years and host of the station’s signature show, Cancion Mexicana, featuring Latin artists.

“It is inspiring to see such growth and innovation in the radio station I began organizing more than thirty years ago out of my living room,” Hernandez-Ramos said. “the Hernandez and Ramos families and I were pleased then to promote culture through Mexican music, Latin jazz, salsa, R&B and more, and I am thrilled to see the Koelbel family’s support for KUVO’s future sharing multicultural music in a state-of-the-art facility benefitting all Coloradans.”

With Koelbel and Company’s $1 million donation, the Buell Public Media Center’s $34 million capital campaign has $2.5 million left to raise to reach its goal. Construction of the building at 21st and Arapahoe began in November, with completion expected in early 2020.

To follow the construction of the Buell Public Media Center, visit http://www.rmpbs.org/capital-campaign/.