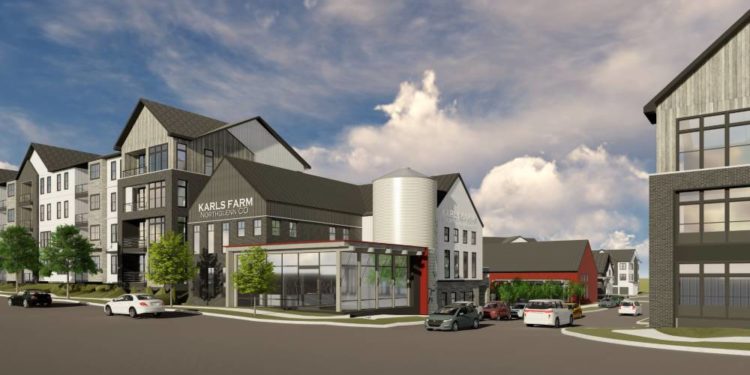 A collection of multifamily residences have broken ground at Southern Land Company’s (SLC) Karl’s Farm development located at 1801 E. 120th Avenue in Northglenn. SLC will invest more than $90 million into the City of Northglenn with the project, building a total of 385 townhomes and studio, one, two, and three-bedroom apartment homes.

“It is a thrill for us to contribute to the amazing Karl’s Farm development,” said Kevin House, vice president of Multifamily Development – West at SLC. “The team at KF Developers, Inc., the master developer behind the project, has done an outstanding job creating something special at Karl’s Farm, where there is rich history and heritage. We are proud to offer dynamic housing solutions in what is poised to become a vibrant community.”

SLC’s 480,000-square-foot community at Karl’s Farm was designed by Denver-based KTGY Group. SLC’s in-house construction division is serving as general contractor. Kimley-Horn in Denver is the civil engineer for the project, and Integrity Structural Corp. of Houston is the structural engineer.

The residences will feature a boutique, modern industrial style that mixes warmth with sleek metals and concretes to deliver a modern farmhouse feel that ties into the larger Karl’s Farm development. The project will offer a robust collection of amenities, including a pool, private outdoor spaces, dog spa, bike shop, and shared workspaces. It will also feature activities and entertainment programming as well as concierge services.

“People are looking for convenience, and Karl’s Farm provides it, especially being located just a short walk from public transit and a mile from Interstate 25,” said House. “Combined with the variety of housing options, amenities and programming we will offer, our project will be ideal for commuters and non-commuters alike.”

According to House, the City of Northglenn is known as one of the best master-planned cities in the country, and Karl’s Farm follows suit as an incredibly well-designed master-planned community. “We seek out opportunities to grow in markets and specific communities where good planning, prioritization of active lifestyles, and an appreciation for great aesthetics are evident, and we have certainly found that here in both Northglenn and Karl’s Farm. We are grateful to the City of Northglenn for their work in shepherding this project.”

According to KF Developers, Inc. strong partnerships have been crucial in the progression of the project.

“Like many development projects, Karl’s Farm has had its challenges, but thanks to many skilled, savvy partners, including the original owners of the property—the Hinkhouse family, Southern Land Company, the City of Northglenn, Richmond American Homes, and Meritage Homes, Karl’s Farm is taking shape beautifully,” said Daniel Frank, president of KF Developers, Inc. “We are proud of the work that has been done to date and look forward to seeing the full project come to fruition.”

SLC’s project at Karl’s Farm marks the company’s fifth project in Colorado. In January, SLC opened a new luxury apartment home community in Denver, Bespoke Uptown. In February, SLC sold the multifamily and retail components of its Rêve Boulder project in Boulder. In April, SLC broke ground on Westerly, its first master-planned community in Colorado, located in Erie. SLC previously developed, owned and sold the multifamily project Centric LoHi in Denver. SLC has maintained a Denver office since 2017 and is headquartered in Nashville, Tenn.