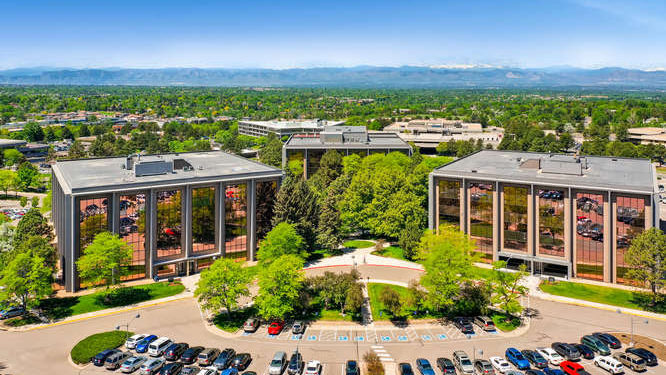 Denver’s office market is remarkably resilient and healthy, according to Marcus and Millichap’s 2020 Office Investment Forecast. 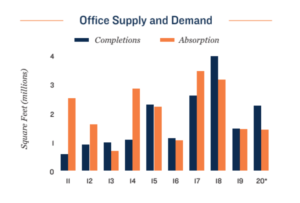 Developers have remained disciplined when considering new projects over the past few years. Even speculative office space is largely focused in the major office districts of LoDo, the CBD and near the Denver Technology Center.

However, uncertainty following WeWork’s failed initial public offering could bring space in the city’s core back onto the market. The coworking firm, which is the metro’s largest holder of office space, recently saw a developer back away from an impending lease. Nonetheless, the overall office market has a solid foundation and bright outlook.

Mid-tier properties that can be repositioned dominate sales activity. Class B assets are aggressively targeted as investors seek buildings that can be upgraded to attract technology firms. A prevailing and ongoing strategy among investors is to capture demand at current or future stops along the metro’s transit lines. As light-rail construction timelines shorten, prices for these properties climb and cap rates compress. The average cap rate at the beginning of this year was in the mid-6 percent range, the lowest in the past two decades. Class C properties garner plenty of attention, accounting for approximately 25 percent of deals and trading at first-year returns near 7 percent. Midtown and West Denver properties with a sizable vacancy component draw the most attention from buyers.

Institutions and capital migrating from the coasts, meanwhile, are focused on Class A properties in the CBD, LoDo and Denver Technology Center. 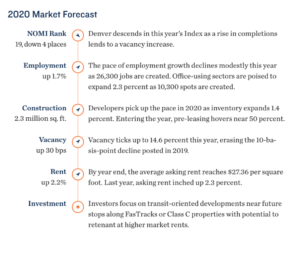 Apartment Property in the Highlands Sells for $7.5M