YOU ARE HERE:Home » Architecture » Metro State’s Aerospace and Engineering Sciences Building Aims for the Stars
ArchitectureConstructionDevelopmentEngineeringTechnology 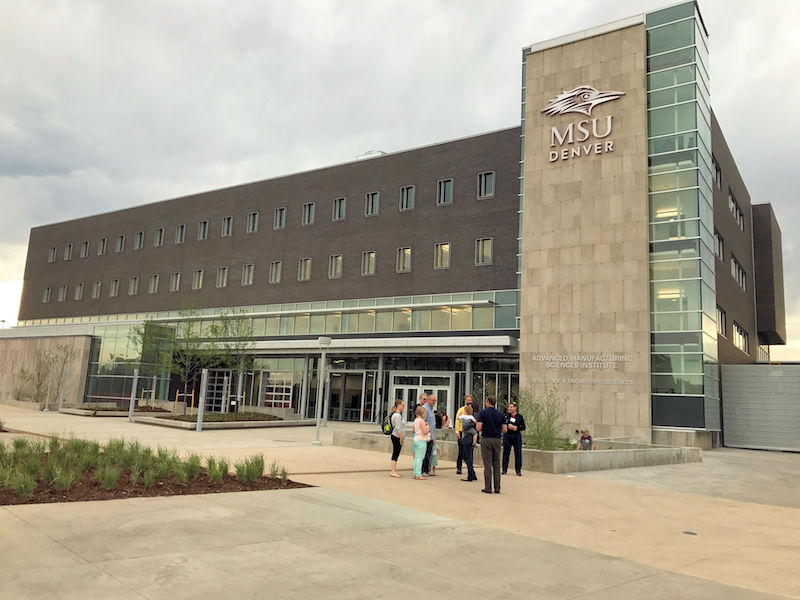 DENVER — Metropolitan State University of Denver’s Advanced Manufacturing Sciences Institute marked the recent opening of the new Aerospace and Engineering Sciences Building, attended by more than 300 students, employees, and members of the huge team that built a top-of- the-line facility devoted to the future.

“The idea for this building came from a meeting in fall 2013 in Washington, D.C.,” said President Stephen Jordan, Ph.D., noting that someone suggested that there are eight key economic drivers in this country. “One was aerospace, and one was advanced manufacturing.” While other universities focus on research — he lauded the University of Colorado — “We are one that builds a workforce. …. We can make a mark and fill a gap that did not exist before.”

Two companies – Hartwig, Inc., and York Space Systems — have developed partnership agreements with the university. A third – the mega-space company Lockheed Martin – also has become part of the equation: Jordan, who retired on June 30, announced that the company had given a $1 million gift to the program, which included funding for an additive manufacturing laboratory 3-D printer called the Stratasys Fortus 900mc. All three companies will set up shop on the school’s fourth floor, extending the scope of the project’s interior build-out.

Bruce O’Connor, vice president of Production Operations at Lockheed Martin Space Systems, told those at the ribbon-cutting that the new building would provide a “game-changing advantage as students come out of school.” The gift also funds a new Lockheed Martin Endowed Director of the Advanced Manufacturing Sciences Institute; the current director of the institute — Robert Park, Ph.D.—will assume that job.

According to MSU, the facility will house advanced additive and precision machine tools driving advanced manufacturing, as well as advanced satellite and aerospace technology. The top level – called the growth floor – will house York Space Systems’ new manufacturing facility and mission operations center, which will operate spacecraft on-orbit, in real-time with production capability for up to 150-200 satellites per year. Students will work on complex design projects, new product development projects, and manufacturing cyber-security.