YOU ARE HERE:Home » Charity » More than 75 Employees Give Back During Second Annual Encore Gives Day
Charity 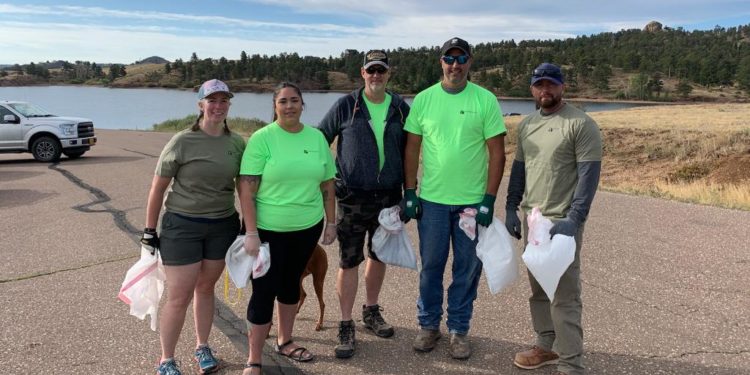 Employees of Colorado electrical contractor Encore Electric recently came together to celebrate and give back to the places where they live and work during the Second Annual Encore Gives! day. With six events across Colorado and Wyoming and more than 75 volunteers, the people of Encore Electric showed their commitment to being good neighbors and stewards of these great places they call home.

“It’s amazing that we were impacting several local communities at the same time,” said Willis Wiedel, president. “I am grateful to Encore Electric team members and their families and friends who helped their communities and represented Encore in this way. This is a testament to our culture and purpose.” 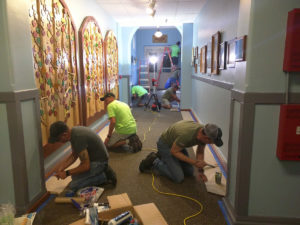 In Colorado Springs, a group of three people showed up to Palmer Park to move rocks onto the trail and help create a safer, smoother trail. The work included ensuring the rocks fit and were secure, as well as chiseling and crushing rock work. It was incredibly labor intensive, but the team took it in stride. “Emily (McCurley) and Tom (Thompson) were amazing out there,” Jenny Howard, project coordinator from the Colorado Springs office and captain of the Palmer Park team said. “They worked well together and even though it was hard work, they had amazing attitudes. It was fun to hear their bantering over how each other chose very heavy rocks in inconvenient locations.”

In the Colorado Mountains, there were two events: the Eagle River Cleanup in Eagle County and Rally the Valley in Glenwood Springs. Sixteen volunteers showed up to the Eagle River Cleanup, and they spent their time cleaning alongside the river, the nearby trail and some even got wet in the river. The Encore river cleanup team collected about 11 bags of trash overall, including a mattress, skateboard and an unusual fishing net.

“We believe that if you use the river, then you should take care of it,” said Courtney Raab, administrative assistant in the Avon office. “It is a life-line here in the Eagle Valley.” Encore has been volunteering at this event for the past four years, and is one of the larger groups that participates. A small group of six people took part in a walk during Rally the Valley in Glenwood Springs. The event supports the Valley View Foundation and benefits patients at the Calaway – Young Cancer Center, providing resources at no additional cost. Encore Electric has sponsored this event for several years and is proud to support them. “It was a great day to be inspired by survivors – it was a beautiful day and so awesome to be representing Encore in this worthy cause,” said Meg VanderLaan, chief marketing officer and Glenwood Springs captain.

In Fort Collins, 24 volunteers gave their time to Colorado Youth Outdoors, a non-profit dedicated to building relationships through traditional outdoor recreation. The group spent their time building a fence, rerouting some electrical circuits for temporary connexes, as well as landscaping, including weed removal, installation of weed barrier and laying down bark and mowing the lawn. “It was great to partner with Colorado Youth Outdoors,” said Andy Gordon, director of Northern Colorado. “The way they support getting veterans and youth outdoors really aligns with what our northern employees care
about.”

The Votes are in and JE Dunn has Chosen: Boys and Girls Club!