YOU ARE HERE:Home » Charity » Mortenson and Habitat for Humanity of Metro Denver for Women’s Engagement Weekend
CharityConstructionEvents 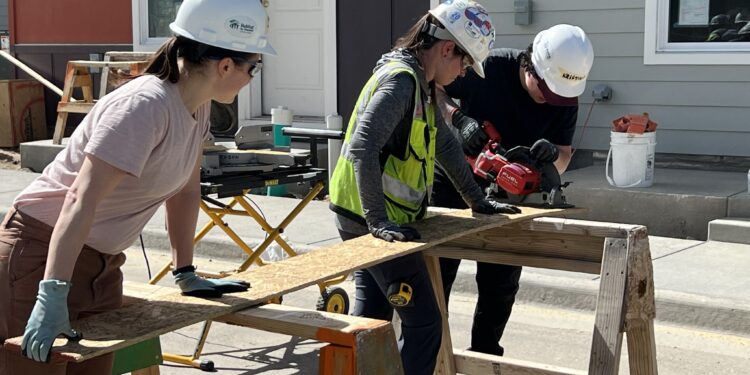 On May 6-7, women from across Mortenson’s Denver operating group came together for Habitat for Humanity of Metro Denver’s Women’s Engagement Weekend.

The event was part of Mortenson’s recently announced multi-year partnership with Habitat for Humanity of Metro Denver to engage women leaders and provide construction skills training for women while supporting the creation of more affordable housing in Denver.

“Our inaugural Women’s Engagement Weekend with Habitat for Humanity of Metro Denver is a great example not only of Mortenson’s commitment to building stronger communities and a more diverse construction workforce but also of the huge heart that our team members bring to everything they do,” said Maja Rosenquist, senior vice president at Mortenson. “It was incredible to see so many women working together on a job site, supporting one another, developing their skills, and delivering much-needed affordable housing here in the Aria neighborhood.”

For over 35 years, in addition to financial contributions, Mortenson Denver has participated in annual volunteer opportunities at the various Habitat build sites throughout the state. The company announced the more formal partnership in March during its annual industry event celebrating Women in Construction Week. Additional activities as part of the partnership will include: