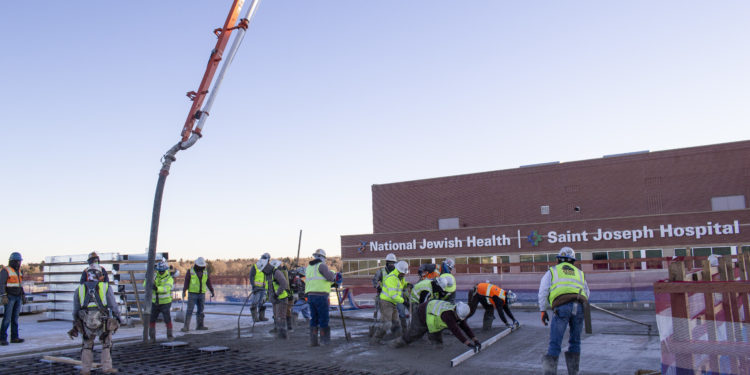 Mortenson recently topped out on the $71.7 million, 104,350-square-foot expansion of National Jewish Health Center for Outpatient Health at the corner of East Colfax Avenue and Garfield Street in Denver. Mortenson is serving as both the developer and design-builder on the project, which is slated for completion in fall 2021.

Construction of the new outpatient facility is helping to meet a significant increase in demand for the patient care, research and education provided by National Jewish, one of the top respiratory care hospitals in the nation. According to the hospital, between 2008 and 2018, patient visits to the hospital’s main campus grew more than 57 percent to 90,996 annual visits.

“At Mortenson, we’re driven by a desire to build a better world, and what better manifestation of that goal in action than helping to realize such a vital healthcare facility for the region,” said Taber Sweet, director of Real Estate Development of the Denver Operating Group of Mortenson. “A huge thank you to our Mortenson team and our fantastic design and trade partners for keeping this project on track despite all the challenges brought on by events in 2020.”

The new five-story building, designed by Davis Partnership, includes clinical exam and procedure rooms, a pharmacy, a café and space for ancillary services. An attached 251-stall parking structure is located partially under the medical building. Previously a surface parking lot, the site provides necessary proximity to existing core services and infrastructure to allow National Jewish to serve its growing population.

“This project is a great example of what is possible when different divisions within Mortenson come together to solve problems for our clients,” said Gene Hodge, vice president and general manager of Mortenson Denver. “We understand the necessity of this expansion to National Jewish’s mission as our nation’s leading respiratory hospital, and we’re proud that our Denver and Development groups were able to align to help make this project a reality.”