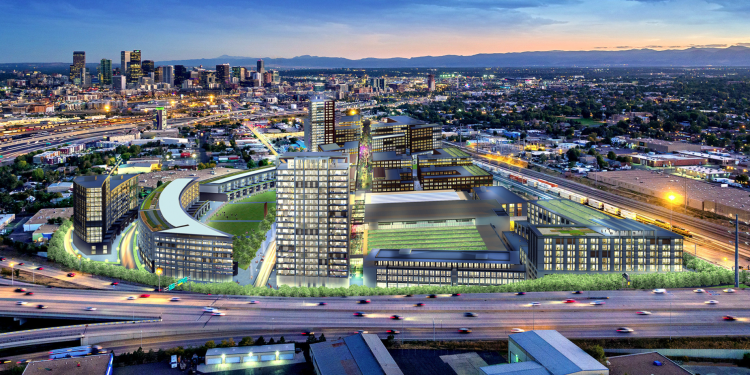 A rendering of hypothetical development that would be allowed under a rezoning for 4400 Fox Street. (Courtesy Tryba Architects)

The Denver City Council recently approved the rezoning of The Denver Post’s former printing plant in Denver’s Globeville. The site is now approved for mixed-use development with buildings as high as 12-stories.

Denver-based Ascendant Capital Partners DNA LLC and Greenwood Village-based Woodspear Properties are the managing members of the LLC that owns the property. Ascendant Capital purchased the property in February 2008 for $17.1 million from the Denver Post. Tryba Architects were hired to set a marketing vision and an infrastructure plan for the land.

30-acres of the total 42-acres was just rezoned for 12 and 8 stories. The owners are planning to sell the site to developers specializing in horizontal and mixed-use development.

The site has been on the market for four years. Brokers Marty and Eric Roth with CBRE are representing the owners.

Zak Kessler, general counsel for Greenwood Village-based Woodspear Properties says the site is now loosely zoned for mixed-use that could include approximately 3000 residential units and 500,000 square feet of retail/office development.

The combined ownership groups background is in flex-industrial properties in Colorado. “We are a horizontal developer. Once it became clear that this wasn’t going to be industrial development, it really fell outside of our wheelhouse in terms of vertical and what we had originally planned to do on the site,” said Kessler.

The initial plan was to reposition the existing building for industrial use and continue industrial development in the surrounding area but a change in the location of the near-by commuter light-rail station, from its original location further afield at 38th, to a closer location at 41st and Fox, opened up the area for a much grander vision. That combined with RiNo’s development boom is what caused the shift in focus.

“Obviously as you get a light rail stop one block off of the southern boundary of the property, it changes what it would be,” said Kessler.

The site is being marketed as ‘Fox North’ that according to Tryba will be a “new visual gateway to the city and region.” Fox North is one stop away from Denver Union Station (DUS) and the entire regional transportation network.

“We think that as River North continues to redevelop and Sunnyside Highlands redevelops, we think there could be some great things done in this part of town. We think there will be robust interest,” said Kessler.