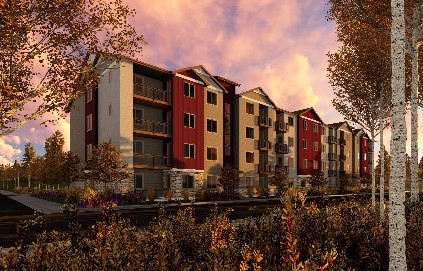 Patriot Park Apartments will contain 258-luxury apartments across five buildings, varying between three and four stories. The community will offer units from one-three bedrooms, with an average unit size of 890-square-foot. Resident amenities will include a 3,500-square-foot clubhouse with a fitness center, leasing office, business center, pool, and spa. The property backs up to the Sand Creek Trail and will include a large open park space and dog park.

The seven-year fixed rate debt was originated through a relationship with a regional bank. The high leverage debt facility contains a three-year interest only, and flexible prepayment provisions. “NorthMarq was pleased to be involved in securing construction financing which not only met sponsorship objectives, but will serve the greater Rustic Hills submarket, which has not seen any new multifamily community additions of 50+ units since 2008,” said DeHarty.

“We are appreciative of NorthMarq’s efforts in aligning us with a capital partner who understands our vision and long term goals,” said Brian Bahr of Goodwin Knight.