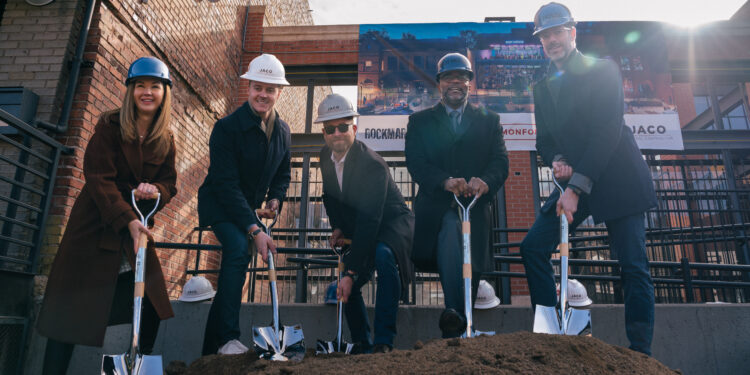 Today, during a ceremonial groundbreaking for Riot House at 1920 Market St., Monfort Companies, Riot Hospitality Group, Circle West Architects and JACO General Contractor, announced its acquisition of the former El Chapultepec building at 1962 Market St. and the Giggling Grizzley at 1320 20th St. Monfort paid $5.38 million for both properties, according to property records.

The same team is behind Dierks Bentley’s Whiskey Row, a redeveloped historic property that sold earlier this year for $24 million. The partnership is currently developing Riot House two doors down, which is expected to open in Q4 2023.

These acquisitions mark the partnership’s latest investments in Denver’s Ballpark neighborhood — a total of four since 2018 — representing a collective commitment to transforming the district into a world-class entertainment destination.

“Tremendous opportunity exists in Denver’s Ballpark neighborhood and we could not be more excited to announce our latest investments on the block,” said Kenneth Monfort, executive vice president of Monfort Companies, “Riot House and the forthcoming rehabilitation and amalgamation of El Chapultepec and the Giggling Grizzly will build upon the momentum prevalent in this neighborhood and ideally, catalyze continued investment here. We see investment in this neighborhood as an economic imperative that will help Denver claim its spot as a top entertainment destination nationally.”

A renovation of a 21,000-square-foot historic building at 1920 and 1926 Market St., Riot House is a high-energy concept that will bring “tropical nightlife vibes to Denver,” offering patrons an award-winning food and beverage program in an exhilarating and modern setting. The space is comprised of a hybrid restaurant and bar that will feature a large center bar, dance floor, rooftop patio, and world-class audio-visual system.

“We are deeply committed to the LoDo community,” said Ryan Hibbert, CEO of Riot Hospitality Group, a national hospitality management company. “Riot House will not only add an energetic entertainment destination to LoDo but will further increase the economic vitality of this incredible neighborhood.”

Riot House is designed to complement its neighbor, building upon the unique, high-energy offerings of Whiskey Row and further establishing the neighborhood as an entertainment destination that competes on the national stage. The former “The Real World” home will undergo extensive interior and exterior renovations as well as a rooftop addition.

A hybrid restaurant and bar, Riot House will feature a large center bar, dance floor, rooftop patio and world-class audio-visual system. The high-energy concept will set a new tone in downtown Denver with entertainment and nightlife that offers patrons award-winning food and cocktails in an exhilarating and modern setting. With an existing location in Scottsdale, AZ, this will be the second Riot House outpost and one of 16 locations for the national hospitality management company.

While the final plans for a redevelopment of 1962 Market St. and 1320 20th St. have yet to be announced, the partnership intends to build upon the momentum of Whiskey Row and Riot House with a new concept that strives to further round out the offerings on the block and in the Ballpark neighborhood while honoring the impact and significance of El Chapultepec in Denver’s history.

Recent investments in the neighborhood align with Denver’s Downtown Area Plan, a 20-year strategic plan between the City and County of Denver and the Downtown Denver Partnership for the City’s urban core, which identifies Ballpark as a key downtown district and calls for continued focus on expanded entertainment options to enliven the district year-round. The Plan also calls for continued investment in the growth of downtown’s entertainment and dining options as engines for economic impact and
positioning downtown as a regional destination.