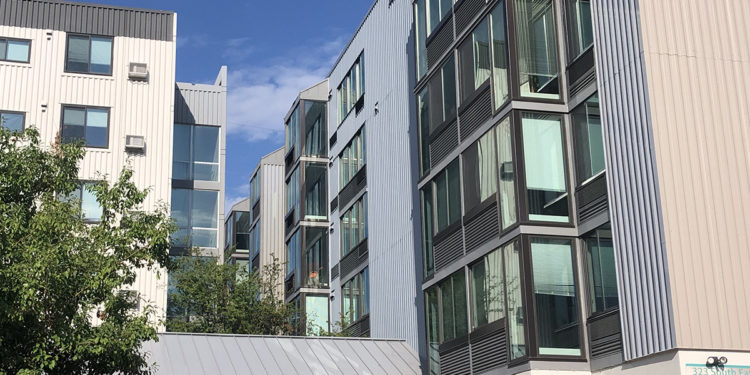 Pinkard Construction, with EJ Architecture and owner Eaton Senior Communities, has completed the Summit Assisted Living conversion project. The Summit project was a major renovation of a vacant six-story tower that is a part of the larger Eaton Community campus in Lakewood.

Work included structural and MEP retrofits, and extensive unit renovations that included plumbing stack additions and rerouting, electrical redistribution, demising wall relocations, and unit build outs. Pinkard “rescued” this project for Eaton Senior Communities when the originally hired contractor was replaced during the preconstruction phase. When Pinkard entered the project in May 2018 – midway through the schematic design phase – the project was almost $6 million over budget, and falling dramatically behind the owner’s tight schedule. Because the tower was in the process of being vacated, the delay significantly
imperiled the owner’s revenue projections for 2018 – 2019, and created a dramatic need for urgency and efficiency within the Pinkard preconstruction team.

Following several timely partnering and design charrettes, the OAC team agreed upon a value engineering plan that enabled Eaton to maintain nearly all of its original program while meeting the owner’s $6.4 million budget.

Pinkard’s unit massing/revenue studies with Eaton and EJ Architecture were key to budgetary success in preconstruction. During budgeting/VE, Pinkard constructed an architectural mockup of a proposed unit to enable the ownership team to better visualize proposed unit sizes. To accelerate the design phase and allow construction to commence closer to Eaton’s originally projected start date, the team agreed to combine the design development drawing phase with the construction document phase. This approach shaved roughly six weeks off the design schedule.

Despite the considerable delays associated with the changeover to Pinkard during preconstruction, Pinkard was able to complete the project in budget and only 13 days beyond the completion date set by the original contractor.

Construction on this affordable housing project was privately funded.