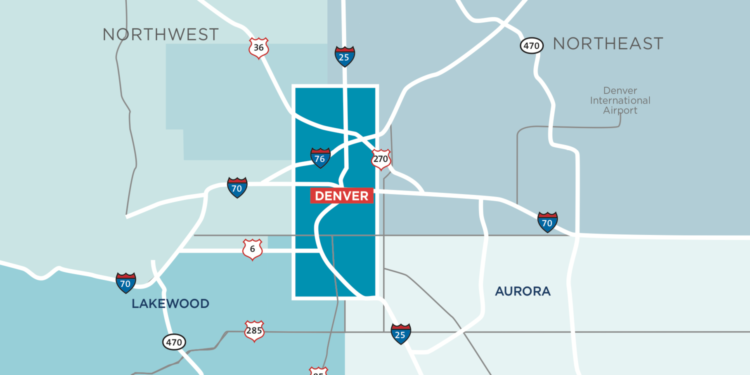 Consistently ranked among the best economies and best places to live in the country, the metro continues to attract a highly skilled workforce and an increasingly diversified tenant mix as well. According to Cushman & Wakefield’s Q4 Denver Marketbeat report, the city added over 44,700 jobs year-over-year as of November and closed 2019 with an unemployment rate of 2.6 percent. This figure represented a 20-basis point (bps) decrease quarter-over-quarter and continued to outpace the national average of 3.6 percent. Denver has cemented itself as the clear choice for doing business in the Rocky Mountain region and is well-positioned for continued growth entering 2020. 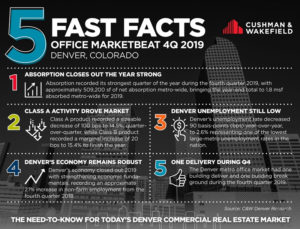 Denver’s economy closed out 2019 with strengthening economic fundamentals, recording an approximate 2.1 percent increase in non-farm employment from the fourth quarter 2018. In turn, Denver’s unemployment rate decreased 90 basis-points (bps) year-over-year, to 2.6 percent representing one of the lowest large-metro unemployment rates in the nation. Denver continues to benefit from the evolving industry diversity that has been largely influenced by the tech industry’s robust growth over the past 24 months. Denver’s momentum should continue throughout 2020, albeit at a slower pace, as signs of a slowing national and local economy continue. Download the report. 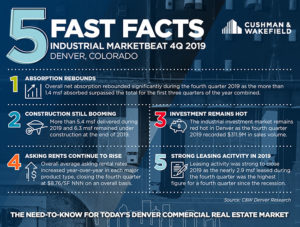 Vacancy in industrial product declined marginally across the Denver metro area during the fourth quarter 2019, closing at 5.8 percent on an overall basis. This figure represented a 10-bps decrease quarter-over-quarter, but a 110-bps increase year-over-year. This year-over-year change was the result of a 90-bps spike in vacancy during the third quarter 2019 as a result of nearly 2.1 million square feet (msf) of speculative product delivering with only 21.5 percent preleasing. New speculative product has recorded slow preleasing activity but strong activity upon delivery during the current industrial construction boom and Cushman expects this space to continue to lease up over the next several quarters.However, with more than 4.5 msf of speculative product remaining under construction across the metro area, vacancy should continue to fluctuate quarterly but remain mostly flat over the next year. Download the report.
Previous post

Well-Being a Core Tenant of the Saunders Workplace