YOU ARE HERE:Home » Brokerage » Rare 8.55-Acre Site in Boulder to be Redeveloped
BrokerageDevelopmentMultifamily

Rare 8.55-Acre Site in Boulder to be Redeveloped 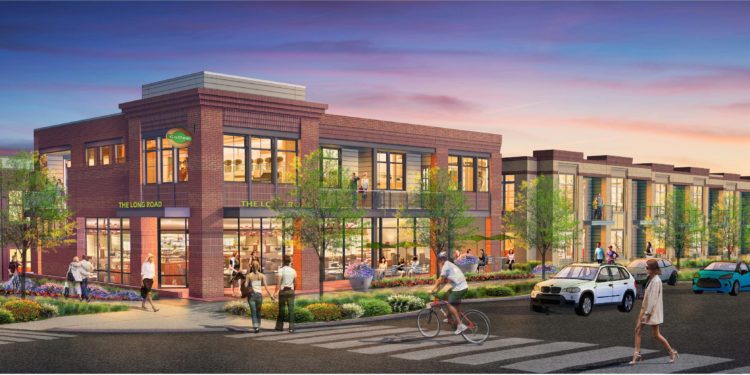 Atlanta-based Pollack Shores Real Estate Group has purchased 8.55 acres at 4750 Broadway, a fully-entitled, shovel-ready development site in Boulder. The site – formerly Colorado National Guard headquarters – will be developed into a 201-unit market-rate apartment and townhome community called The Armory Boulder. The project will be completed in 2021 and will mark Pollack Shores’ entry into the Colorado market.

“We have worked closely with the community over the last six-plus years to shape the plans for this site and can’t wait to see it come to life,” revealed Bruce Dierking in a company press release. “Pollack Shores and Matrix Residential have the resources and experience to deliver and manage a larger, complex project like the Armory, and we are delighted to have the opportunity to partner with them.”

The Armory is a mix of two-story apartment buildings, 18 three-story townhomes, 8,400 square feet of retail storefronts along Broadway and two pocket parks that will be open to the public. The project team consists of several Colorado-based companies, including The Mulhern Group, which will serve as the architect of record; Martines Palmeiro Construction, the general contractor; and JVA, the civil engineer.

“With an extensive entitlement period, Boulder’s zoning laws, and lack of developable land sites, The Armory Boulder will be nearly impossible to replicate,” commented Chris Cowan. “With 64,000 people commuting to Boulder from elsewhere every day – and an additional 30,000 expected by 2040 – the already unprecedented demand for housing will only become more acute given that Boulder’s developable residential land is expected to be fully built-out by the mid-2030’s,” shared John Jugl, Jr.

The Armory Boulder offers a necessary need to the area with major employers nearby, such as Google, Amazon, and Twitter. The site is located ten minutes from the University of Colorado Boulder (CU) and the renowned Pearl Street Mall with over 800 businesses and nearly 7,000 employees. Its proximity to the foothills in North Boulder (NoBo) brings an abundance of biking, running and hiking trails that will resonate with its inbound residents.