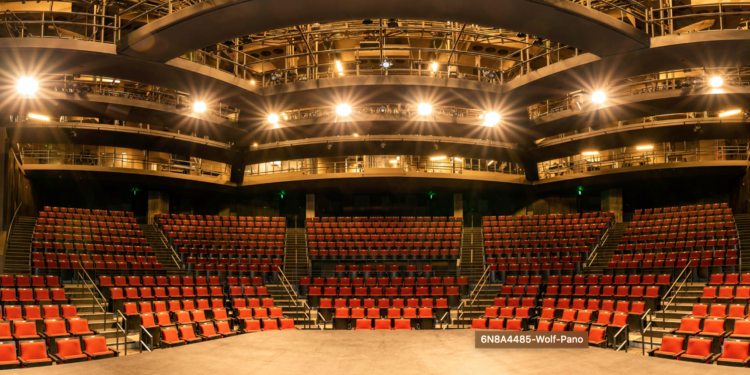 The Wolfe Theater, courtesy of Denvercenter.org

Providing project management, Cumming’s team of cultural and entertainment construction experts successfully managed the major renovation of both theatres in just under two years. The design was led by award-winning Semple Brown and Turner Construction served as the general contractor.

Named after long-time DCPA Trustee William Dean Singleton, the Singleton Theatre, formerly the Ricketson Theatre, is an intimate 200-seat proscenium theatre. Since the venue was originally built as a cinema, transforming the Singleton lobby and theatre was one of the highest priorities for the team as it needed dramatic changes to evolve into a world-class live entertainment space.

In addition to creating an entirely new entry with an elevator and renovated lobby for patrons, the team also modified the mechanical system, introduced all new finishes and architectural lighting to improve the ambiance and acoustical response, and increased accessible seating to round out the new guest experience. For the performers and theatre staff, a new modular performance stage was installed, a suite of dressing rooms much closer to the performance stage was constructed, as well as a backstage elevator and a much-needed left egress path was also added.

Unlike the Singleton Theatre, The Wolf Theatre, formerly the Stage Theatre, required new foundations, floor slabs, and an entirely new concrete seating bowl, as well as the removal of large hydraulic lifts when the major renovation started. Largely re-built within its original footprint, the 600-person seating arrangement was generally maintained, but with significantly increased accessible seating and a revised seating arrangement to align aisles with primary entrances to reduce bottlenecks. Additional storage was added below the seating bowl for production personnel, and a new storage mezzanine backstage was constructed to serve as an accessible stage path for performers.

In addition, production and technical capabilities were completely revisited with all-new A/V and IT infrastructure throughout the building from new performance lighting and upgraded audio to new stage lifts and a redesigned catwalk to help create impactful guest experiences. Fire suppression and other life safety systems were all addressed during the renovation to make sure they were all updated to current codes as well.