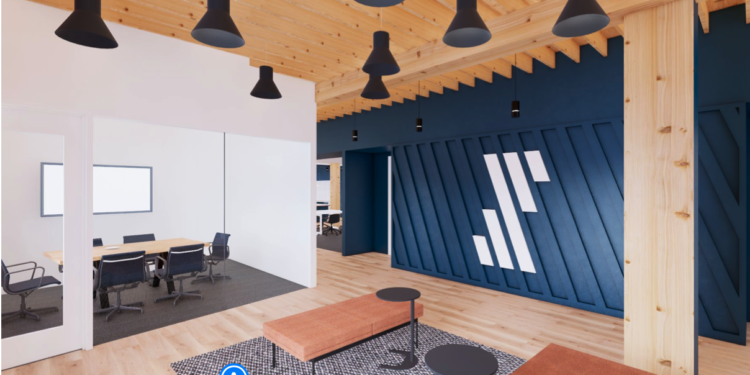 In 2021, technology company Fivetran renewed its 38,000-square-foot lease at STEAM on the Platte, Denver. Rendering: Fivetran

According to CBRE’s annual Tech-30 report, Denver ranks among the top tech markets in North America for office rent gains over the past two years, buoyed by the city’s growth in tech employment and tech’s share of venture capital funding.

Denver’s 14.2% growth in tech jobs in 2020 and 2021 helped propel the city to the seventh-greatest gain in office rents (10.3%) among Tech-30 markets. Rent growth was even stronger in downtown Denver, the region’s premier tech submarket. Office rents downtown increased 13.2% from the second quarter of 2020 to the second quarter of 2022, ranking fifth among North America’s top tech submarkets.

Denver continues to be an attractive destination for tech companies based elsewhere who are looking to expand. Since 2013, San Francisco Bay Area-based tech companies have leased 2.3 million sq. ft. of office space in Denver. Another growth driver: Tech companies claimed 87% of the nearly $2.2 billion in venture capital funding awarded to Denver companies in this year’s first half.

“The tech industry’s strength since the start of the pandemic grew Denver’s employment base, although economic headwinds have also strengthened in recent months driven by inflation and rising interest rates. This has caused tech companies—fueled over the past decade by a near-zero interest rate environment—to now pivot away from growth and to focus on reducing labor costs and creating efficiencies within their real estate portfolio,” said Nicholas Weld, a first vice president with CBRE’s Tech & Media Practice in Denver.

He continued, “In the long-term, Denver is well positioned to continue being a magnet for tech. The region has benefited from the change in tech job growth patterns, with jobs now dispersed across more cities. When tech companies ramp up hiring again, they will look favorably to Denver for its highly educated workforce, business-friendly and moderate-cost environment, appealing lifestyle for work-life balance, and a time zone that is ideal for both domestic and international business.”

The Tech-30 report measures the industry’s impact on office demand and rents in the 30 leading tech markets in the U.S. and Canada, as well as select tech-heavy submarkets. CBRE’s analysis found that, over the past two years, more than two-thirds of the top 30 North American tech markets registered office-rent growth. Seven of those increased by double-digit percentages.

Leading tech submarkets, often located near universities and characterized by scant vacancy and high-quality office space, tend to generate some of the strongest rent gains in their cities.

The 11th annual edition of CBRE’s Tech-30 report outlines how the tech industry’s share of U.S. office-leasing activity slipped in the first half of this year, underscoring that the tech industry’s often-unmatched impact on the office market has receded a bit this year. In Denver, tech was the third-most active industry for office leasing over the past four quarters, following Business Services and Legal, according to CBRE’s third-quarter Denver office report.

Meanwhile, U.S. tech job growth slowed to a 2.1% year-over-year gain in this year’s first half from a 4.5% pace in last year’s second half. Hiring momentum persists in many markets, including a dozen top U.S. and Canadian tech hubs that registered double-digit percentage gains in tech employment in 2020 and 2021, led by Vancouver, Toronto, Austin, Seattle, Montreal and Denver.

Counter to the national trend, Denver’s tech job growth was just as strong in 2020 and 2021 compared to the prior two years (both periods saw 14.2% growth). Denver’s tech workforce of 92,383 people amounts to 18.3% of all office-using positions in the market.

CBRE’s report also identifies 10 emerging tech markets to watch, including Colorado Springs at No. 4. Colorado Springs is home to 12,481 tech workers, representing 17% of all office-using jobs in the city.