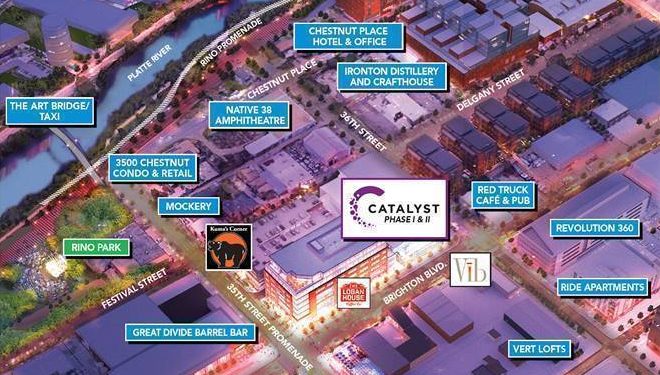 DENVER – River North Art District (RiNo) has become a hotbed for technology and start-up companies looking to expand or relocate to Denver. Now that RiNo is growing up, new sub-areas are emerging, and several fast-growing retail and commercial concepts are finding their next home in these up and coming areas. Kuma’s Corner, a popular Chicago based burger joint, Logan House Coffee and the VībHotel have all selected the River North Promenade area in RiNo, as their next spot for expansion. Located on 35th and Brighton Boulevard, River North Promenade is a burgeoning new cross section of RiNo that is destined to be the future heart and soul of the area.

Kuma’s Corner, slated to open its sixth location in December 2019, will be among the most exciting new concepts to Denver this year, bringing its heavy metal-inspired burger concept to the River North Promenade. The 4,000-square-foot restaurant will be adjacent to a new six-acre RiNo Park, Art Bridge and a walkable commercial district. Kuma’s Corner is dedicated to giving back to the community and the local arts scene, making it the perfect addition to the Rino Arts District — and will play an integral role in creating a vibrant, urban center in the area.

The River North Promenade is gaining attention and investment from developers as well. Colorado’s oldest and most venerable real estate developer, Koelbel and Company, developed Catalyst there last year, an 180,000-square-foot mixed-use retail and office building, which has been 90 percent leased with only one remaining restaurant opportunity available. Kuma’s Corner will be located in Koelbel’s master planned “City Block” – which will also include a new event center and Kaiser Innovation Center. In addition, Koelbel will be announcing plans for Phase II of the office project later this Spring, located at 3555 Brighton Blvd. Together, these developments from Koelbel will create a new vibrant urban center for the area.

“Koelbel’s belief, along with our immediate area stakeholders, is that the new business service developments in the area around 35th and Brighton are solidifying Denver’s long-term vision of making this the heart of RiNo,” said Carl Koelbel, vice president of Koelbel & Company. “The River North Promenade is central to the flourishing commercial development in RiNo, as it is adjacent to the highly anticipated RiNo Park, two blocks from the 38th and Blake commuter rail station, and surrounded by restaurants, breweries and hotels.”

In May 2019, Logan House Coffee will open its third Denver location in the Catalyst building with a large, open flowing concept, serving the hundreds of employees, residents and tenants of the building and surrounding area.

There are numerous other happenings in the neighborhood that will truly make 35th Street the epicenter of activity. The city has already delivered the first segment of Brighton Boulevard from 29th to 44th streets, secured $5 million from the Elevate Denver Bond Program for the River North Promenade, and is working on development of 35th Street. More residential is coming online with a new condo project from the developers of Lumina Apartments in LoHi taking shape one-block west of Catalyst on the river at 3500 Chestnut. The 12-story building will include just under 100 units as well as 15,000 square feet of office and retail.

“With the amount of development that’s happening in RiNo, it’s more important than ever to keep a strong pulse on what makes this community thrive,” said Jennifer Gipfert, CEO and co-owner of TWC. “Our vision is to support RiNo’s evolving creative ethos by offering a valuable hotel option to increase foot traffic for local businesses. We remain committed to collaborating and partnering with as many local artisans as possible throughout the project.”

The hotel will feature a rooftop lounge, a lobby bar highlighting local craft beverages and food, and signature “Zen Zones” where guests can unwind. Other amenities will include 2,000 square feet of meeting space, a grab-and-go food service area, gaming pods, free Wi-Fi, a fitness center, as well as rooms with smart TVs and workstations with Herman Miller desk chairs.

Finally, the River North (RiNo) Park is one of the many projects outlined in the River North Area Plan approved by City Council in 2003. The RiNo Park would be the first green space in the River North area; together with the future River North Promenade it will bring a relaxing open space that sparks healthy living and where community can gather for culture and entertainment. The park will also feature two buildings that are being repurposed and will be activated by the River North Art District to provide engaging art programming. This green space is one of the many improvements the city is bringing to the area, which historically has been home to manufacturing industry and artists. Denver Parks & Recreation and the North Denver Cornerstone Collaborative expect start of construction of RiNo Park in spring 2019 with and anticipated opening in spring 2020.

River North has grown and improved dramatically in recent years with restaurants, art galleries and innovative industries moving in and adding to the vibrancy to the area, a trend that shows no signs of slowing down.

AEC Industry Raises $53,000 for the National Sports Center for the Disabled (NSCD)